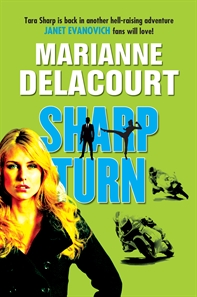 Tara Sharp is back in a new high octane mystery... This time she's helping out motor racing mogul Bolo Ignatius whose team is being sabotaged and she's also coaching the girls the local high class bordello on the finer points of body language reading.
Description
Tara Sharp is at it again! Things are finally looking up on the work front, which may just mean she'll be able to escape living in her parent's garage.
Not only has the owner of a motorcycle racing team put her on retainer to find out who's sabotaging his bikes, but a wealthy 'madam' (of the bordello variety) wants her 'girls' coached on how to read their clients more astutely.
But dark clouds are gathering. The word is that local gang lord, Johnny Viaspa, has engaged a hitman known as 'the Finisher' to clean up some 'unfinished business'. And given her previous history with Viaspa, Tara has reason to be concerned... As if that weren't bad enough, Wal, her narcoleptic security chief is suddenly homeless and is eyeing off the couch in Tara's digs while talking about 'keeping an eye on her'.
About Marianne Delacourt

Marianne Delacourt is the pseudonym of a successful Australian fantasy writer who is sold throughout the world. Marianne grew up in Perth and now lives in Brisbane with her husband and three sons.

Sharp Turn is the second book in Tara Sharp Crime/Romance series, and very different from most of Marianne’s other novels. If you enjoy the cyberpunk and space opera novels Marianne is commonly known for then this may not be the book for you, although it does have a strong female protagonist with the ability to read aura’s. For a die-hard fan of Ms de Pierres, like myself, any book is a good book. As with all of Marianne’s writing, this book flows along quite smoothly and you reach the end of the book before you know it. It was great to see another strong and well developed female character that is lacking in many other books around at the moment.
The MC, Tara Sharp, is a PI with a paranormal ability. I’m not the biggest fan of the paranormal genre, but didn’t mind the fast paced thrills of Sharp Turn, scattered with minimal amounts of romance.
The publisher, Allen & Unwin, has a sample of the book you can download here http://www.allenandunwin.com/_uploads/BookPdf/Extract/9781742370033.pdf to give you a taste of the book. I’d recommend reading this extract if you’ve never read any of Marianne’s books before and reckon you’ll want to rush out and pick up a copy shortly after.
Posted by Scott Wilson at 1:04 AM