Book Review: Jane and the Damned By Janet Mullany 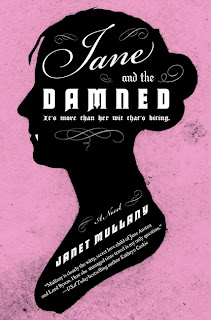 Jane and the Damned By Janet Mullany

The “stakes” are high and vampires rule when legendary author Jane Austen joins the ranks of the undead in Janet Mullany’s bloody wonderful literary mash-up, Jane and the Damned. In the bestselling tradition of Pride and Prejudice and Zombies; Sense and Sensibility and Sea Monsters; and Mr. Darcy, Vampyre, comes a supremely smart and wickedly fun novel that renders the beloved creator of Persuasion and Emma truly immortal—as Mullany pits a transformed Jane Austen and her vampire friends against savage hordes of invading French!

Aspiring writer Jane Austen knows that respectable young ladies like herself are supposed to shun the Damned—the beautiful, fashionable, exquisitely seductive vampires who are all the rage in Georgian England in 1797. So when an innocent (she believes) flirtation results in her being turned—by an absolute cad of a bloodsucker—she acquiesces to her family’s wishes and departs for Bath to take the waters, the only known cure.

But what she encounters there is completely unexpected: perilous jealousies and further betrayals, a new friendship and a possible love. Yet all that must be put aside when the warring French invade unsuspecting Bath—and the streets run red with good English blood. Suddenly only the staunchly British Damned can defend the nation they love . . . with Jane Austen leading the charge at the battle’s forefront.

Another mash up monster novel, adding the horrific element to the classic piece of literature. In this book we have our beloved Jane Austen turned into a vampire on a whim by William, an older vampire who just happened to be her dance partner at a local assembly ball. Jane tells her father, who, while horrified at the news of his daughter having been bitten by one of the Damned, keeps a calm head. With the hope of finding a cure, they travel to a location with reportedly mystical baths. Here they meet a clan of vampire. These vampires are glamorous, formal and quite polite. They offer to help the English living in Bath during the French invasion since the English have been kinder to them than the French over the years.

The story is based around some common themes and elements of vampire lore, but with the author’s ability to write a compelling tale, this novel is quite original. I won’t go into details of what lore is the same and what has been changed as it would spoil the surprise.

I would have actually liked the book more if Mullany had made her characters original, rather than using famous literature characters. The flow of the story was sufficient enough to warrant not relying on familiar creations. Mullany’s humour was also evident in the writing, making it a light hearted read.
Posted by Scott Wilson at 3:18 AM