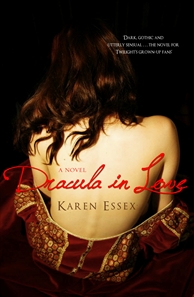 Dracula In Love by Karen Essex

Reader, you are about to enter a world that exists simultaneous with your own. But be warned: in its realm, there are no rules, and there is certainly no neat formula to become - or to destroy - one who has risen above the human condition ... the truth is, we must fear monsters less and be warier of our own kind.

From the shadowy banks of the River Thames to the wild and windswept Yorkshire coast, Dracula's beautiful, eternal muse, Mina - the most famous woman in vampire lore - vividly recounts the joys and terrors of a passionate affair that has linked her and Count Dracula through the centuries, and her rebellion against her own frightening preternatural powers. Mina's gothic vampire tale is a visceral journey into Victorian England's dimly lit bedrooms, mist-filled cemeteries and terrifying asylum chambers, revealing the dark secrets and mysteries locked within. Time falls away as she is swept into a mythical voyage far beyond mortal comprehension, where she must finally make the decision she has been avoiding for almost a millennium.

The result is a darkly haunting and rapturous tale of eternal love and possession.

'Dark, gothic, and utterly sensual, Dracula in Love is the novel for Twilight's grownup fans ... in this novel of forbidden desires and secrecy, purity is an overrated virtue.' - Michelle Moran, author of Nefertiti: A novel

'Karen Essex turns the legendary tale of immortal love into a seductive, blood-tingling celebration of the senses; Mina Harker is a heroine for the ages - bold, intrepid, and in love with one of the most dangerous, irresistible men in history. If you read only one more vampire novel, let it be this one!' - C.W. Gorner, author of The Last Queen and The Confessions of Catherine de Medici

Karen Essex is an award-winning novelist, journalist and screenwriter. Her novel, Leonardo's Swans (2006), was a US and international bestseller and it won the prestigious Italian award for foreign fiction, the Premio Roma. Essex has also written two biographies. She has written screenplays for Warner Bros, Columbia/Tristar and 20th Century Fox. Her articles, essays and profiles have been published in Vogue, Playboy, LA Weekly and many other magazines and newspapers. She's made many appearances in the media and is a sought-after guest lecturer at creative writing courses, in history and women's studies programs. She lives in Los Angeles.

Dracula in Love is going to exclude certain reader off the bat simply because the legendary character of Dracula from Bram Stoker’s novel has been used in another author’s book. Given the fact that Essex is using a well known character, she has a lot of work to do to build upon Dracula and make it original and entertaining without becoming a cheap mash up like Pride and Prejudice and Zombies.

The story is set just after the initial release of Bram Stoker’s Dracula, with the MC, Mina, wanting to put her perspective on the events that are immortally set in stone thanks to Stoker’s tale. Almost half of the books is written from Mina’s point of view before her first encounter with Dracula, so it is a bit slow and drawn at times. And when Mina does finally meet the Count, the story kicks in and becomes a much faster paced read. The style reminded me of a Stephen King novel where you start reading and it is quite ordinary and every day. You just want him to get the waffle out of the way so that the real story will start.

It is hard to write much else about the book without giving away anything else, but I will say that if you can get past the first one hundred pages, you will enjoy the book. I compare it to getting into Steig Larsson’s Girl with the Dragon Tattoo, where the first half of the first book was really unnecessary to the overall story. But after the slow start it is great.
Posted by Scott Wilson at 1:42 AM