Book Review: Down Among The Dead Men by Robert Gregory Browne 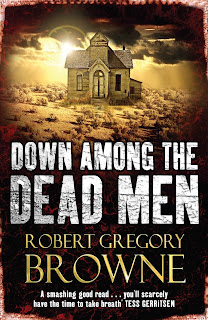 The Day of the Dead. El Dia de los Muertos. That time of the year when Mexico celebrates its lost loved ones. But two people aren't celebrating. Nick Vargas, a disgraced newspaper reporter, now true crime writer, seeks the truth behind the slaughter of nuns in a house near the Texas border. And Hannah Freeman, a beautiful prosecuting attorney on holiday from Southern California has lost someone very precious to her – her younger sister, Jen, has disappeared without trace in Ensenada, Mexico. The realization that a sinister cult is at work and that they are behind Jen's disappearance leads them to a small town in Mexico full of dark secrets and deadly rituals, and a series of haunted caves, where something or someone lurks. Watching them. Waiting for the right moment to strike.

Robert Gregory Browne is the winner of the prestigious AMPAS Nicholl Fellowship in Screenwriting and has optioned and developed material for numerous production companies. He lives in Ojai, California. Down Among the Dead Men is his fourth novel.

Robert Gregory Browne has written a real nail bitter with Down Among the Dead Men, with enough twists and turns to keep the reader on the edge of their seat until the end of the ride. The main character, Nick, is a writer (why is it so many books are about writers?) who is attempting to gain some standing in the true-crime community after writing a bogus book and being found out. With his name on the line, he takes a contract to document the murder of some nuns in Mexico. There is a bit of predictability with the story nobody else wanting to take ending up being something extremely voliatile and puts Nick life in danger.

Nick is thrown together by circumstances with a woman, Beth, whose sister goes missing and finds herself stranded in Mexico. The real adventures begins here and continues on until the resolution at the end of the book.

Definitely worth a read.
Posted by Scott Wilson at 4:56 AM

Thanks for the kind words, Scott.

A wonderful author with a giving heart. Check him out. -Debbie