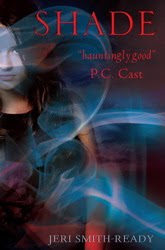 Description
Like everyone born after The Shift, sixteen year-old Aura can see and talk to ghosts. She's always found this mysterious ability pretty annoying, wishing only that she could reverse it and have some peace. But when her boyfriend, Logan, dies unexpectedly, Aura is forced to reconsider her connections to the dead...

Devastated by Logan's sudden death, Aura realises that her ability to see ghosts might actually be a blessing. Surely a violet-hued spirit Logan is better than no Logan at all? But just when Aura is coming to terms with having a ghost as a boyfriend, she starts developing feelings for her new friend Zachary, who is understanding, supportive and, most of all, alive. Each boy holds a piece of her heart - as well as vital cues to the secret of the Shift - and it's time for Aura to choose between loving the living, or embracing the dead...

The Shift happened sixteen years ago and since then, everyone born after the shift was able to see and communicate with ghost. But two years ago ghost seem start becoming agitated and some were turning in to shade; much anger and more dangerous spirit. This all was more than just an average nuisance to Aura until the night of Logan’s birthday.

It was Logan, Aura’s boyfriend’s birthday, his brothers and sister decided to have a party at the house because the parents were out on a cruise. This was to be the night, Aura decided to giver herself to Logan for his birthday. They had waited too long; the moment was just never right so she decided tonight would be the night. But fate had other plans. Logan drank way too much and was on the verge of passing out. Aura was very upset that he had ruined their night together and yelled at him.

Logan left saying he was going to take a shower, but really intended on sorting out the problem. It didn't take long for Aura to hear a commotion and find the body of Logan, lifeless on the floor and his brother trying to do CPR to revive him. She then sees Logan's ghost, who is most apologetic about everything. Me, I'd be a bit upset about being dead more than anything else.

In Shade Smith uses lore that see ghosts take the form that they inhabited during their happiest moment on earth, unlike some stories where ghosts are in the state that saw their death, such as decapitated victims etc. So let’s just say there isn’t very many ugly or hideous ghosts in Smith’s book

In any case, there are many creative world-building elements to go along with the pretty unique love triangle of Post-Shifter Aura, Dead Logan and Pre-Shifter Zachary. It’s also a credit to Smith-Ready that she kept me on my toes plot wise – you could never be sure what would happen next. So far no real villains have emerged, but you do get the sense that the government is getting stricter and less tolerant with their policy towards ghosts – mainly because some ghosts can turn into “shades” – giving them a dark power that the living are terrified of.

This book sets the scene for a good series where the lore and legend of Shades will no doubt be explored further until the reader is more comfortable with Smith’s new world of the recently departed.
Posted by Scott Wilson at 5:09 AM