Book Review; Is That Thing Diesel? By Paul Carter 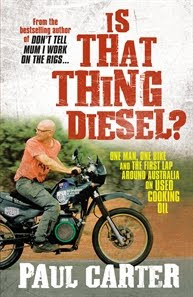 The next eagerly awaited, high octane, seat-of-your-pants adventure from the author of the bestselling Don't Tell Mum I Work on the Rigs (she thinks I'm a piano player in a whorehouse) sees (the surely a bit bonkers) Paul Carter circumnavigating Australia on a bio-diesel motorcycle.

At forty years old, a successful writer, husband and father, no longer toiling on offshore drilling rigs, was Paul Carter happily nestled in the cotton wool of suburban life enjoying the fruits of his labour? Was he f**k!

With his manic life left far behind and the perfect opportunity to take it easy stretched before him what else would a middle-aged, bike obsessed, man want?
Yes, that's right, he'd want to be the first guy to ride around Australia on an underpowered experimental motorcycle that runs on used cooking oil, wouldn't he? Preferably without getting hit by a semi-trailer full of bridge parts. Is he out of his mind? Quite possibly.

Embark on a rollickingly, downright dangerous and often unhinged quest that starts on an environmentally friendly motorcycle built on a shoestring budget by students, and ends with a plan to break the motorcycle land speed record for bio fuel.
Carter is back to his old balls-to-the-wall style of writing, prepare to laugh out loud.

Paul Carter was born in England in 1969. His father's military career had the family moving all over the world, re-locating every few years. Paul has worked in the oil industry now for fifteen years, re-locating every few years (old habits). Paul has lived, worked, gotten into trouble and been given a serious talking to in England, Scotland, Germany, France, Holland, Norway, Portugal, Tunisia, Australia, Nigeria, Russia, Singapore, Malaysia, Borneo, Columbia, Vietnam, Thailand, Papua New Guinea, Sumatra, the Philippines, Korea, Japan, China, USA and Saudi Arabia. Today he lives in Perth with his wife, baby daughter and two motorbikes. But who knows where he'll be tomorrow ... Paul's first two books are stories from his life on the rigs, Don't Tell Mum I Work on the Rigs, She Thinks I'm a Piano Player in a Whorehouse (A+U, 2005) and This Is Not a Drill (A+U, 2007).

Paul Carter has written a couple of hilarious books over the past few years, all based on personal experiences, which make them even more interesting. If you haven’t read Don’t Tell Mum I Work on the Rigs, you’ve really missed a treat. This is another great book written by Paul Carter in the same style of a good Aussie yarn filled with unbelievable events that you know have to be true. Carter has a great companion website where you can view video footage of many of the events you read about in this book, http://www.thegoodoil.tv/

If you like Ewin McGregor and Charlie Borden’s adventure series, then you would love this book, especially with Carter’s great sense of humour. There’s nothing particularly new about the concept behind this book, enough celebrities have done the motorbike tour around Australia and documented it. What stands out with this book, is Carter’s style of writing and his over the top personality.

Grab yourself a copy of this, and settle in for a good evening of laughs.
Posted by Scott Wilson at 8:54 PM