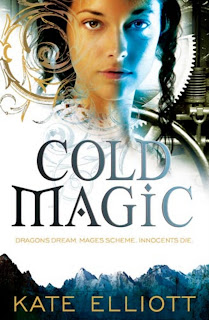 First volume in a fabulous fantasy advenure with a Victorian-era feel - featuring mages, dragons and two girls who'll decide the fate of their world.

As they approach adulthood, Cat Barahal and her cousin Bee think they understand the society they live in and their place within it. At a select academy they study new airship technologies and the dawning Industrial Revolution, but magical forces still rule. And the cousins are about to discover the full ruthlessness of this rule.Drawn into a labyrinth of politics involving blood and old feuds, Cat is betrayed by her family and forced to marry a powerful Cold Mage. As she is carried away to live a new life, fresh dangers threaten her every move and secrets form a language she cannot read. At least, not yet.But both cousins carry their own hidden gifts and these will shape great changes to come. For in the depths of this treacherous world, the Wild Hunt stirs in darkness and dragons are waking from their sleep.

Kate Elliott lives in Hawaii, USA. In addition to the Crossroads series and the Crown of Stars series, she is co-author of THE GOLDEN KEY.

Cold Magic the first book by Kate Elliott's that I’ve had the pleasure of reading. I have only read a few steam punk novels to date so was quite surprised and entertained by this story. Now that I’ve read this first book I can see myself following the Crown of Stars.

Cold Magic is a steampunk tale with a science-vs.-magic twist, which is a novel concept and worked well to build a unique tale. Catherine Hassi Barahal is the main character. She is a young university student more inclined towards science when she is thrust ceremoniously into the clutches of the cold mages. Cat is of Carthaginian descent - here 2000 years ago Carthage was ruled by queens (called dido's for the famous mythical founder) and Hannibal defeated the Romans at Zama for once, so the two powers fought themselves to a standstill and while the Roman Empire eventually extended over most Europe, North Africa and Spain remained Carthaginian influenced and after the Empire breakup some 1000 years ago, there has been a patchwork of mini-states all over Europe, which now stops at the Baltic ice-sea.

The setting is an ice-age like alt-Earth around the 1800's but with a quite different history, magic houses, but also budding science that the "cold mages" dislike and want suppressed. Recommended for fans of fantasy, steampunk and the YA addict looking to dip a toe in more traditional fantasy waters without sacrificing strong female characters and traditional hints of romance.
Posted by Scott Wilson at 3:35 AM