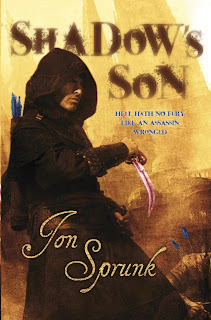 Some fantasy novels are gritty and dark - and some are absolute murder...
Caim makes – or perhaps more accurately, takes – his living on the edge of a blade. Murder is a risky business, but so far he reckons he’s on the right side of it. Or he was…because when a short-notice contract job goes south, Caim finds himself thrust into the middle of a sinister plot in which he seems to be one of the primary marks. Pitted against crooked lawmen, rival killers and the darkest kinds of sorcery, it’s going to take more than luck if he’s to get through this alive.He may lack scruples, but he’s still got his knives and his instincts to rely on – and a developed sense of revenge, or should that be justice? – to fall back on. But when his path leads him from the hazardous back streets of Othir and into the highest halls of power, will instincts and weapons alone really be enough?

After ten years’ hard work and having published a number of short stories, Jon Sprunk has broken into the world of Serious Publishing with his knock-out debut novel SHADOW’S SON. He lives in Pennsylvania with his wife
Shadow’s Son is a great fantasy novel about and assassin and the myriad of adventures and events that form part of their daily routine. The main character, Caim is the assassin and Kit is his beautiful guardian, (only no one else can hear or see Kit). Kit is portrayed like Caim’s guardian angel, which warns Caim about a multitude of dangers and saves his life. Not a bad guardian to have if you choose being an assassin as a profession.

Shadow's Son, like I said before, is a quick read, but with the added bonus of being one of those stories that reveals all the pertinent information as the plot unfolds and at a quick pace. Thus preserving the mysteries that slowly come to light about Caim's past and about his companion Kit, the spirit who only Caim can see and who flitters in and out of his life throughout the book
Against Caim's better judgement; he takes a job as a favour to his one friend in Othir, Mathis. The job was started by Ral, another assassin, who quit the job for another. This job goes awry in so many different angles. Caim finds himself protecting his targets daughter, Josey - a gorgeous young lady.

I was amazed at how this book reads as a whole story, or a stand-alone, with so much happening in this novel to complete the story. There is an end to the main story here, but there seems to be an underlining which you start to learn of Caim and his family history, the Shadows. I liked the use of Shadows as the ability Caim has. I am very curious to learn more about Caim as he learns more of who he is and what he can do.
Posted by Scott Wilson at 2:18 AM