Book Review: City of Evil The Truth about Adelaide’s strange and violent underbelly by Sean Fewster 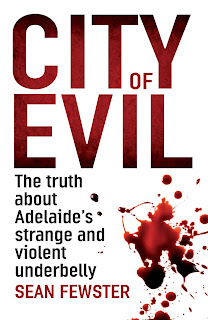 Drawn from ten years of eyewitness experience as a court reporter, Sean Fewster lifts the lid on the most bizarre and twisted true crime cases in Adelaide's history.
They call Adelaide the city of churches. What they forget is that every church has a graveyard — and every graveyard is full of skeletons. Adelaide, an elegantly designed, civilized city, where the inhabitants are known for their love of the arts, good food and fine wine, is also the place where many of Australia s most bizarre and macabre crimes have taken place. The cases in this book show that Adelaide truly does have another side: from the murder of a transvestite, pro-wrestling truck driver by his two lesbian lodgers (who worked as prostitutes) during an argument over a camera; to the prosecution of an elderly couple by the RSPCA for keeping, in frightful conditions and almost starved to death, a collection of 120 stray dogs and six pigs. This book is more than a collection of some of the most attention-grabbing, shocking and puzzling cases from the past ten years: it also looks at why it might be that so many have happened in this sunny, conservative, unassuming state capital.

Sean Fewster is a well-known journalist in Adelaide — and for the past ten years has been the court reporter for the ADELAIDE ADVERTISER. This is his first book.

This is one of those books that you will either love or hate, depending on your taste in non-fiction. With the latest Australian fascination with the Underbelly TV series, I can see many viewers grabbing a copy of this non-fiction book to fill the void.

I found this book well written and quite interesting, and at times hard to comprehend how some of the content could actually be fact and not part of a James Patterson novel. Well they say fact is often stranger than fiction, and this is very true for some of the nut bags described in this true crime book.

Fewster has really balanced out the weird and fascinating history of the bizarre and inexplicable acts of some of the stranger residents of Adelaide. There are the tales that will chill you to the bone from the horrific nature of the crime, to ones you almost feel sorry for the perpetrator, such as the old geezer looking after, well sort of, stray dogs.

If you are after a book in the vein of the telly series Underbelly, you will probably be disappointed as it covers a wide range of criminal activity. Well worth the read though if you are interested in the disturbing things some people get up to.
Posted by Scott Wilson at 4:20 AM