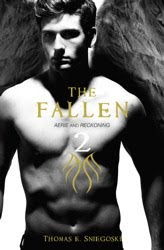 Aaron's senior year has been anything but typical. Half-angel and half-human, he has been charged to reunite the Fallen with Heaven. But the leader of the Dark Powers is determined to destroy Aaron—and all hope of angelic reconciliation.

Struggling to harness the incredible force within him, Aaron trains for the ultimate battle. With the Dark Powers building in strength and numbers, their clash may come sooner than he expects. And everyone who's ever mattered to Aaron is now in grave danger.

Aaron must protect the girl he loves and rescue the only family he's ever known. Because if he can't save them from the Dark Powers, how can he hope to save the Fallen

Angels are the new vampires, or so it seems. The Fallen 2 is the second in a new series about the Nephilim and part of a new trend in YA publishing. I’ve seen a few books on the shelves recently that deal with fallen angels, Nephilim and demons. It’s a nice change from the amount of paranormal romance books with vamps and wolves are the MC’s.

The Angels in this book remind me of the ones from the Supernatural series, flawed and vulnerable, niave, yet extremely powerful. Aaron Corbet and his two companions – his trusty Labrador Retriever, Gabriel and the angel Camael – had just left a little town in Maine where they encountered a creature so ancient, it had a long history of bones to pick with the Divine Creator. Since then they’ve been back on the road, searching for a haven called Aerie, which Camael insists is important to Aaron fulfilling his destiny. Aerie is a place unlike any other on this world… a special place—a secret place, where those who have fallen await their reunion with Heaven.

Great book that I will no doubt read again sometime in the future.
Posted by Scott Wilson at 3:50 AM