Book Review: The Way of Kings The Stormlight Archive By Brandon Sanderson 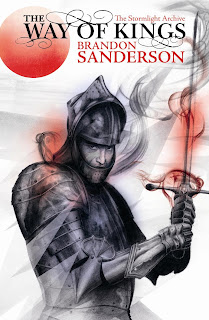 The brand new epic fantasy series from international bestseller Brandon Sanderson.
According to mythology, mankind lived in The Tranquiline Halls until the Voidbringers captured heaven, casting out God and men. So men took refuge on Roshar, the world of storms, but the Voidbringers followed, assaulting humanity ten thousand times. To help them cope, the Almighty gave men powerful suits of armour and mystical weapons, known as Shardblade and, led by ten angelic Heralds and ten orders of knights known as Radiants, mankind finally won out.Or so the legend says. Today, the only remnants of those mythical battles are the Shardblades, the possession of which makes a man nearly invincible on the battlefield. The entire world is at war and has been for centuries, since the Radiants turned against mankind, so kings strive to win ever more Shardblades, each wishing to be the one who finally unites mankind under a single throne.

Brandon Sanderson was born in Nebraska in 1975. Since then he has written the Mistborn series, amongst others, become a New York Times bestselling author and been hailed as the natural successor to Robert Jordan, indeed he was appointed by Jordan's estate to complete Jordan's Wheel of Times. He lives in Utah.

To start off with let me say that this is one epic book at over 700 pages. The worst thing about this book was that after getting to the end, it was apparent that this was just the beginning of something bigger. Perhaps Brandon Sanderson’s past experience with writing part of the Robert Jordan Wheel of Time series has influenced how he approaches a story.

With this massive tome, Brandon has time to develop some well designed characters and introduces us to a great new world through the intricacies of society, the racial undertones, the fashion and everything else that makes a world accessible to a reader. Sanderson’s narrative draws the reader in as does the somewhat recognisable world not that dissimilar from the middle ages of our own world.
There are some other great elements of Sanderson’s world that take a fresh and unique approach to the old tired and tested fantasy theme. For example, the alchemy and magic lore within this book are refreshing and open up wonderful opportunities for further development in the next book, or two, that will follow this one.

Technology plays a role in the setting, as well. The world has scientists devoting themselves to the study of magic, putting it to new uses that have a very steam-punk feel. These people don't view themselves as primitives: they look at their lives in much the same way we do, feeling like they're living at the best of times, where technology has developed far enough to make their lives easier and give them hope for continual new developments in the future.

The book has three main characters; Kaladin, Shallan and Dalinar, and a multitude of lesser characters, who occasionally also have chapters or "interludes" written from their point of view. These breaks from the main story reminded me of how the tv show Lost was presented, where there was the overall theme of the story, but different episodes dealt with a character and their trials and tribulations in particular. This was a brilliant tool in evening out the pace of such a long piece of work.

The main story focuses on Kaladin, a surgeon's son forced to become a bridgeman -- a form of military slavery that involves carrying siege bridges in Alethkar's ongoing war with the Parshendi, who at the very start of the novel assassinate Alethkar's king. Dalinar is the late king's brother (and uncle of the current monarch), who along with nine other High Princes is running the war effort against the mysterious Parshendi. And finally, on the other end of the continent, there's Shallan, a young noble girl who wants to become the apprentice of Jasnah, a princess and famed scholar.
Posted by Scott Wilson at 8:39 PM