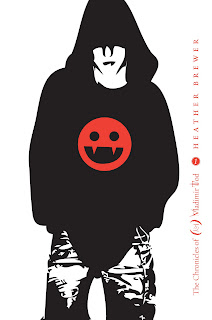 If you thought eighth grade was tough, try it with fangs and a fear of garlic.
Junior high really stinks for thirteen-year-old Vladimir Tod. Bullies harass him, the principal is dogging him, and the girl he likes prefers his best friend. Oh, and Vlad has a secret. His mother was human, but his father was a vampire. With no idea of the extent of his powers and no one to teach him, Vlad struggles daily with blood cravings and enlarged fangs. When a strange substitute teacher begins to question him a little too closely, Vlad worries that his cover is about to be blown. And then he realises he's being hunted by a vampire killer, and suddenly hunger, girls and bullies seem not quite such a problem after all.

The Chronicles of Vladimir Tod books are a great new series that i am going to be following like the Skulduggery series. It only took me a day to read both of the first two books in the series.

The story is about Vladimir Tod, who is a 13-year-old vampire, with a vampire father and human mother who had just died three years earlier.

Tod ends up living with his mother’s best friend, “Aunt” Nelly. His Aunt is a nurse and she keeps him supplied with blood from the hospital With his best friend Henry by his side, Vlad navigates bullies at school, a crush on a nice girl, and growing up, none of which are easy. But then his favourite teacher disappears, and the strange substitute who takes his place starts to make Vlad feel very uneasy.

Fans of Darren Shan, would also probably enjoy this new series as it is written in a similar style, but not as gory, so younger readers will be able to read it to.
Great new series.
Posted by Scott Wilson at 2:06 AM