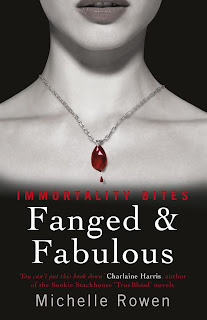 'My name is Sarah Dearly, and I've got major problems. Last month, I was turned into a vampire by the world's worst blind date. Then I may have, totally by accident, started a war between the mostly peaceful bloodsuckers and a bunch of sociopathic vamp hunters who have nicknamed me the Slayer of Slayers.''Now I'm being used as bait to draw out the hunters' bad-ass leader, while my gorgeous 600-year-old boyfriend Thierry seems to be blowing me off, and my sizzle-hot, fanged friend Quinn is trying to turn my self-defence lessons into make-out sessions. So you know what? I'm done. I've had it. There comes a time when a vamp has to just suck it up and go after what she wants. And as soon as I figure out what that is, that's exactly what I'll do...'

Michelle Rowen has written novels in the areas of paranormal romance and young adult fantasy. She lives in Southern Ontario.

FANGED AND FABULOUS starts out with Sarah Dearly trying to enjoy a jog, when she's attacked by a vampire slayer. He backs off once he realizes exactly who she is - the Slayer of Slayers (or so he thinks). This starts a whole chain reaction in the vampire community - those that aren't terrified of Sarah want to kill her just to prove they can. Given that Sarah's generally incompetent, this poses a big problem for her. Only having been a vampire for three months, Sarah Dearly is still confused. She loves her boyfriend, Toronto's Master Vampire, Thierry, but she's not sure how he feels about her. And he's pulling back. Things just haven't been the same since Mexico ...

To add to the mayhem, someone's killing vampires, vampire hunters and humans, bodies drained of blood, with puncture marks on their necks. Two bodyguards hired by her 600-year-old vamp boyfriend are following her. Then she finds out the leader of all the vampire slayers, Gideon Chase is hot on her tail, too.

Rowen makes frequent reference to Buffy the Vampire Slayer, and her scenes where bodyguard Janie mentions Sarah going all "Rawrr" complete with vampire claw motions hearken back to BtVS characters doing the same. I think this adds a real sense of pop culture and humour to the books and is done tastefully.

This second book in the series is a good, light hearted read well worth the cover price.
Posted by Scott Wilson at 3:33 AM