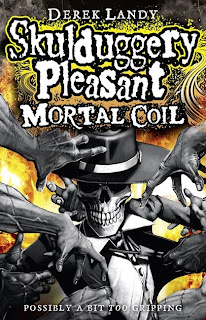 Derek Landy lives near Dublin. Before writing his children′s story about a sharply-dressed skeleton detective, he wrote the screenplays for a zombie movie and a murderous horror film. ′I think my career-guidance teacher is spinning in her grave, ′ he says, ′or she would be if she were dead.′

Skulduggery Pleasant is back, and reunited with his original head. But all is not well in the magical world - for one thing, foreign powers are conspiring to take over the Irish Sanctuary, and for another thing, Valkyrie has discovered she might be the sorceress set to destroy the world. The problem is, she doesn′t feel she can tell Skulduggery what she′s learned... and that′s how all the trouble starts.
With Valkyrie on a quest of her own, to seal her name and prevent her evil destiny from coming to pass, Skulduggery and the gang are even more vulnerable. Which is a shame, because remember those thousands of remnants, imprisoned in the Midnight Hotel? Well, now they′re out. Not only that but they believe Valkyrie is their messiah. And that means thousands of wicked souls, desperate to get to Valkyrie, willing to kill anyone in their way... Oh, and because they can possess anybody, they could be ANYONE.

Now Skulduggery, Valkyrie, Ghastly and Tanith can trust no one. Not even each other...

I have to admit upfront that Derek Landy and the Skulduggery Series are in my top 5 favourites. While Skulduggery is listed as a YA book, I have thoroughly enjoyed the first 4 book in the series and I’m in my thirties. Landy’s characters are so vivid, I almost feel like I’ve seen a movie about them. Come to think of it, I wish they would make this series into a movie or at least a TV series. The storyline is fast paced and action packed.

This is the fifth book in the Skulduggery Series, so if you haven’t read the first four, this one is going to leave you asking a few questions about the characters and plot. If you have been following the series, you won’t be disappointed with this instalment.
Mortal Coil begins around about half a year after the end of book 4, Dark Days. Valkyrie is trying to find out how to stop herself from destroying the world and they are still trying to establish a new Sanctuary in Ireland.

Landy’s characters are well developed from the first few books and really come into their own in this novel. Stephanie/Valkyrie is an extremely amusing and headstrong female leads. She witty, sarcastic and yet loving and caring at the same time. Her emotional human side clearly has an effect on skulduggery and yet she can hold her own against most things that are thrown her way.

Skulduggery himself is still as funny and awesome as ever. And the way he converses with Valkyrie just borderlines hilarious in some instances. I loved how the friendship changed in this book, and you see how much stronger their friendship has become because of the events in this book.

Fletcher is also just as vain and annoying as in dark days, but he displays a lot more of his caring/loving qualities in this book.

With regards to the plot, it seemed somewhat darker in this novel, but then this is understandable considering that they are dealing with someone who can destroy the world. The atmosphere itself was terrifying and some of the events borderline disturbing and I felt chills creeping up my spine just imagining what would happen if this actually happened in reality.

Having said that, there isn't any lack of witty banter and humour in this book and I found myself laughing a lot despite the darker tone. Whether it's the genuine laugh out loud funny parts or just the one liners and conversation from Skulduggery and Valkyrie, there's plenty to make you laugh.
Posted by Scott Wilson at 8:39 PM