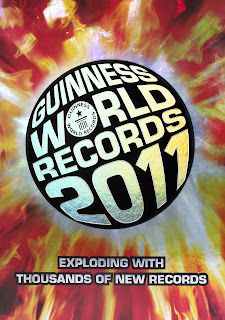 In 1951, Sir Hugh Beaver, the then managing director of the Guinness Brewery, went on a shooting party and became involved in an argument. Which was the fastest game bird in Europe - the golden plover or the grouse? He realized then that a book supplying the answers to this sort of question might prove popular. He was right! Sir Hugh's idea became reality when Norris and Ross McWhirter, who had been running a fact-finding agency in London, were commissioned to compile what became The Guinness Book of Records. The first edition was bound on August 27, 1955, and went to the top of the British bestseller lists by Christmas that year. Since then, Guinness World Records� has become a household name and the global leader in world records. No other enterprise collects, confirms, accredits and presents world record data with the same investment in comprehensiveness and authenticity.
www.guinnessworldrecords.com

- A new unique design – new decade, new look
- A fun, poster-style look reminiscent of the circus, the old Wild West and letter-pressed WANTED ads!
- Fully updated records and 100% new photos
- Quiz of the year – record-breaking questions are peppered throughout the book. Readers can log their answers online and see how they rate against other readers around the world
- Instant expert – fascinating record-related snippets scattered across the book, allowing readers to become instant records experts
- Records GPS – we go around the world, city by city, revealing fascinating records set along the way
- Glossary – improve your vocabulary by learning the meaning of new and unusual words
- Tables/charts – top ten charts throughout the book that put record achievements into perspective and offer facts fast!

I have always loved flicking through the annual Guinness World Records to see what craziness people got up to over the previous 12 months. It is amazing to see what sort of things people go out of their way to do to end up in this world famous book. I mean, who thinks, I want to see how many straws I can fit in my mouth, or how many spoons I can stick on my face. But to make it worse, there are actually people out there who are so impressed that they make a concerted effort to try and beat that record.

The Midnight Rider is an extremely impressive limousine; basically it is a truck that has its own night club in the trailer.

Check out the website for some pretty amazing video footage of some of the more memorable records that are listed in the book.

The format of this edition is spectacular and looks even better than the previous year’s edition. I love how they continue to make the Guinness World Records look more appealing and interesting each year.

If you know what this book is about already, you won’t be disappointed when you get this year’s copy.
Posted by Scott Wilson at 3:30 AM