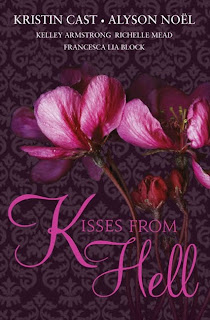 Book Description
What′s hotter than the roster of authors for our fourth Hell collection? Teen vampire romances. KISSES FROM HELL brings it all together with five sexy, sweet, witty and wild short stories featuring teen vampires in this exciting anthology. Richelle Mead offers her many fans the legendary love story of Eric and Rhea Dragomir, parents of Vampire Academy main character Lissa Dragomir. In Kelly Armstrong′s Hunting Kat, reluctant vampire Katiana finds love while escaping from a group bent on her destruction. In Lilith, Francesca Lia Block introduces a sexy, powerful social outcast, who turns out to be more than she seems.
Written by authors who consistently top the New York Times bestseller list (plus one cult favourite in a decidedly more commercial turn), Kisses From Hell offers five stories about the one topic teens can′t get enough of: vampires.
Age 13+
Review
Kisses from hell is the fourth book in the short story collection, featuring five of the hottest names in the paranormal romance genre. There is a story from Richelle Mead, Alyson Noel, Kristin Cast, Kelly Armstrong and Francesca Lia Block.
Richelle Mead’s story, Sunshine, is set in the world Mead has created in the Vampire Academy series. This short piece will be popular with fans of Vampire Academy and provide some background on how Lisa’s parents met and fell in love. As a standalone tale, it could use a bit more drama, but taken as part of the overall series it works well.
Bring Me to Life by Alyson Noël is my favourite of the five stories with a modern day take on the Bram Stoker type Dracula. While this concept is not new, Noel has written a great little story set against a backdrop of an old English manor and a haunting and gloomy environment.

Kristin Cast develops and explores a new subterranean creature in "Above", which was my second favourite in this anthology. I particularly liked the two main characters and the conflict between the two species in this story.

Kelly Armstrong contribution, Hunting Kat, is set in the world created in Darkest Powers. I haven’t read any of her novels before so was unfamiliar with the environment and history here. The story was very entertaining though, with the main character, Kat, who is being hunted by a group known as the Edison Group.

The last story, Lilith, is written by Francesca Lia Block. Lilith is supposed to be a demon or some evil creature from the Bible. I’ve read the Bible numerous times and never come across Adam’s first love, Lilith, so not sure where this lore came from. That being said, this is a great story.
Posted by Scott Wilson at 2:46 AM