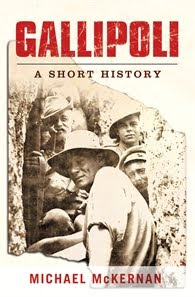 A concise and very readable account of the whole Gallipoli campaign.

Jack Fothergill worked on Melbourne's trams before he went to war and was killed on Pine Ridge on 25 April 1915. In Gallipoli, Michael McKernan tells Jack's story and that of his family, who never recovered from their grief. He also tells the stories of journalist Charles Bean, Chaplain Bill McKenzie, John Treloar and General Ian Hamilton, capturing the essence of what it was really like for the men who fought on the Gallipoli peninsula during that long campaign.

While saluting the bravery, determination and resourcefulness of the Anzacs, McKernan also tells of the failed leadership in London and on the Peninsula that caused great loss of life. He makes clear that 'the most dramatic moment in Australian history' was known to be unwinnable within fifteen hours of the first Anzacs going ashore.

There are few, if any, new issues to emerge from the story of Anzac, but Gallipoli puts the facts in a new context and brings to the fore the essential moments in the campaign. This intense account gives clarity to the story and is a reminder that loss of life in war is always personal, always tragic an always has consequences.
About Michael McKernan
Dr Michael McKernan has worked in military history since 1981 when he took a senior position at the Australian War Memorial in Canberra. First travelling with Anzac veterans to Gallipoli in 1990 he has since taken hundreds of Australians on battlefield tours to Gallipoli. This book brings Michael's dramatic battlefield narrative to a wider readership.

There are just some books that every Australian student should read as part of their education to gain a better knowledge of the history of events that shaped Australia. McKernan’s Gallipoli is one of those books. Great detail is portrayed of the campaign that most Aussie’s sort of know about but not in any extensive way. This nonfiction book is well worth a read to gain an understanding of what our Diggers encountered from the moment they landed until the withdrawal after so much senseless loss of our young soldiers.

It is quite detailed in its account of the life of the Anzacs and the defining moments in the campaign, for which, many young Aussie’s didn’t really understand why they were actually fighting for. McKernan writes in a very personal way that helps the reader feel for the soldiers and puts the war in context of recent research into the campaign.


Even if you don’t like war, the armed services or the like, you should give this book a read to educate yourself with great clarity of the horrific events that happened at Gallipoli.
Posted by Scott Wilson at 5:26 AM