Book Review:Tomorrow, When The War Began By John Marsden 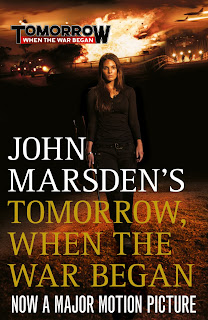 Tomorrow, When The War Began By John Marsden
ISBN:9780330403801
Binding:B-Format Paperback
Pub. Date:01-08-2010
Category: Children's: General Fiction
Imprint: Pan Australia
Price: $18.99 AUD
Somewhere out there Ellie and her friends are hiding.
They're shocked, they're frightened, they're alone.
Their world has changed, with the speed of a slamming door.
They've got no weapons – except courage.
They've got no help – except themselves.
They've got nothing – except friendship.

How strong can you be, when the world is full of people trying to kill you?

Tomorrow, When the War Began is the first of an enormously popular series that has been translated and published all over the world. It is the book that started the series that became the legend...

John Marsden is Australia's bestselling author for teenagers and a highly acclaimed picture book writer. His previous titles include Winter, The Head Book, The Boy You Brought Home and Millie. John Marsden lives at the Tye Estate, just outside of Melbourne, where he opened a school called Candlebark in January 2006. The school currently has 52 students, ranging from Prep to Year 7.

If you are like me, you hadn’t heard of this series by Mr Marsden until this year when the movie came out, staring “Rachel” from Neighbours. Glad to say the book was great and I will be getting the rest of the series to read now.
The story is about Ellie and her friends Corrie, Robyn, Lee, Kevin, Homer and Fi and is set in a small rural town in an undisclosed part of Australia. They decide to go camping, to “go feral” and spend a weekend over the Christmas holidays up the bush instead of at the showgrounds with the townsfolk. Here is where the fun begins and things turn into a Christmas from Hell. While some of the group, like Ellie and Corrie, are close not all of them are, so over the weekend they get to know each other and bond. Ellie and Homer are both from farms and Ellie’s family’s property is the closest to the trail; on coming home hers is the first place they reach, only to find that the dogs are dead. Not only that, but her parents aren’t home, the place is eerily quiet and the power’s off. There’s nothing but static on the radio.

Homer’s farm is the same. With the regular rural life so frighteningly disrupted, they’re quick to realise something is very wrong and they could be in danger. They learn that everyone in the town and from the farms have been locked up at the showgrounds, or rounded up and sent there. The big houses in town have been taken over by the invading enemy – an enemy that is faceless and nameless throughout this series, thus adding to the tension and avoiding fear-mongering at the same time. Ellie and their friends hide wherever they can, eating whatever’s left over in people’s kitchens that’s safe to eat, and trying to locate their families. They find another friend, Chris, in hiding and he joins them, filling them in on what happened.

This is the first book in the Tomorrow series and follows Ellie, who narrates, and the others as they try to survive, stay one step ahead of the enemy, and inflict what damage they can. Together they pool their resources – their knowledge, and create deadly bombs out of lawnmowers, sabotage the enemies ships by putting sugar in the fuel and other such things. Deaths occur, and the death of one of Ellie’s friends at the end of a later book is a scene I’ve never been able to forget.
Posted by Scott Wilson at 9:08 PM