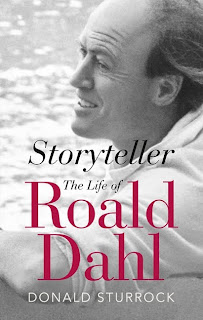 Roald Dahl pushed children′s literature into new and uncharted territory. More than fifteen years after his death, his popularity around the globe continues to grow, and worldwide sales of his books have now topped 100 million.
The man behind the stories, however, remains an enigma. Dahl was a single-minded adventurer, an eternal child, but his public persona was characterised by his blunt opinions on taboo subjects. Described as an anti-Semite, a racist and a misogynist, he felt ignored and undervalued by the literary establishments of London and New York.

To his readers, though, Dahl was always a hero, and since his death his reputation has been transformed. His wild imagination is now celebrated, along with his quirky humour and his linguistic elegance. Figures like Willy Wonka, the BFG and the Grand High Witch are nothing less than immortal literary creations, and in a recent poll he beat J. K. Rowling to win the title of Britain′s favourite author.
In this masterly biography, Donald Sturrock draws on a huge range of source material that has become available since Dahl′s death. The result is revealing, compelling and a pure joy to read.

I had a particular interest in this biography as Dahl is a very, very distant relative, one whom I never met. It’s one thing to have the opportunity to read the life story of someone like Roald Dahl, it is another when you know that they are part of the extended family tree. Even before I married into the Dahl family, I was a huge fan of Roald’s stories, and his work as a screenwriter, such as Chitty, Chitty, Bang Bang and You Only Live Twice.

Most of us would have read or seen a movie based on at least one or two of Dahl’s stories, such as James and the Giant Peach, or at least Charley and the Chocolate Factory. It is hard to imagine meeting someone who hasn’t heard of Charlie and The Chocolate Factory, but how much do most people know about the man behind the story? This well researched biography details many of the other elements of Dahl’s life, such as helping develop a drainage tech valve to help save his son's life, and subsequently thousands of other lives after his son’s.

The most interesting and by far best part of this biography is the wealth of information that Dahl’s estate made available to the author, making is accurate and based on truth. There is details from personal correspondence, journals and interviews with family members and famous friends—Donald Sturrock draws on a wealth of previously unpublished materials that influenced Dahl’s writing and his life.
Posted by Scott Wilson at 3:04 AM