Book Review: Tattoos & Tequila To Hell and Back With One Of Rock's Most Notorious Frontmen by Vince Neil, Mike Sagar 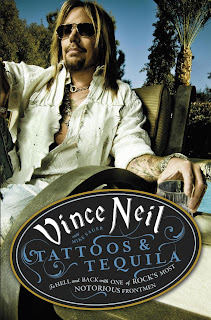 From the lead singer of one of America's most notorious bands.
Motley Crue were formed in Los Angeles in 1981 and have since gone on to become one of America's biggest-selling and notorious heavy metal acts, with nine studio albums and over 80 million album sales. Acquiring huge success by the end of the 80s with their mixture of heavy metal and glam rock, singer Vince Neil's 'glam' look even supposedly inspired the hit Aerosmith song 'Dude (Looks Like A Lady)'. In 1992 Neil left the band to pursue a solo career before returning in 1997. The band went into hiatus in 2000 before reuniting in 2004.In this book, Vince Neil chronicles his personal experiences as singer and frontman for Motley Crue and his time as a participant on reality shows. Motley Crue were a band who always lived up to the typical image of the 'rock and roll' lifestyle and this is captured first-hand by Neil, who writes candidly about the band's struggles with drugs, alcohol and the law.

Vince Neil was born in 1961 and is the singer for American metal band Motley Crue. He has been performing for over 25 years with both Motley Crue and as a soloist. Neil also founded the Skylar Neil Memorial Fund to raise awareness and funding for childhood illnesses. He currently lives in California.

I’ve recently read the Heroin Diaries and The Dirt, yet I just had to read another biography about this legendary band, The Crue. Neil’s autobiography is interesting and tells much of the same outrageous events with sex, drugs and rock and roll as the other two recent biographies about Motley Crue. The main difference is Neil’s book tells of the tragedy surrounding the death of his child, giving him an almost human and sensitive side.

As with many other autobiographies of rock stars, Tattoos contains so many true stories that one couldn’t even begin to make up, no matter how outrageous they seem. It always amazes me that these self confessions don’t end up with the authors in prison for the admission of so many criminal activities. I don’t understand how Neil can talk about all of the drugs etc he took over the years and not be arrested. Mind you, if that was the case, we wouldn’t end up with these crazy books to read.

The main element of this book is how sorry you end up feeling for Neil, even though he’s had everything most people only get to dream about. It’s clear that he’s never learnt anything from his mistakes and sometime even seems somewhat proud of them.

If you’re a Motley Crue, or more so a Vince Neil fan, you will most likely enjoy this book.
Posted by Scott Wilson at 2:35 AM