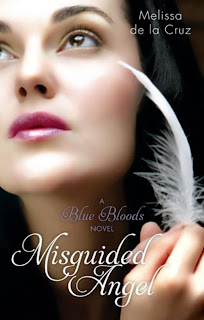 The young, the fabulous and the fanged rule the upper echelons of Manhattan society in book 5 of this fantastically addictive series from bestselling YA author Melissa de la Cruz.

After inheriting the complicated Van Alen Legacy, Schuyler fled to Florence with Jack, risking both of their lives for love. The two of them embark on the mission Schuyler was destined to complete: to find and protect the remaining five gates that guard Earth from Lucifer, Prince of Hell and lord of the Silver Bloods.As the Blue Blood coven weakens yet further, fate leads Schuyler closer to a terrifying crossroads - and a choice that will determine the destiny of all vampires.

Melissa de la Cruz is the author of many best-selling novels, including the Blue Bloods series; the Au Pairs series; the Ashleys series; and Angels on Sunset Boulevard. She is also a frequent contributor to Glamour, Marie Claire, Teen Vogue, and Cosmopolitan. She lives in Los Angeles with her husband and daughter, and is hard at work on the next book in the Blue Bloods saga. While Melissa is not a Blue Blood, she knows people who are...

Misguided Angle is the fifth novel in the Blue Blood series by de la Cruz, and maintains the style and steam that we’ve all come to know and love. The main character, Mimi, has finally become the regent of the illustrious New York coven of vamps. Before she gets a chance to plot revenge that she so badly wants to, she is pulled into a kidnapping by decree of her position. The mystery of this element of the book is extremely well structured and gives nothing away. You will be wondering who the culprit is through the book, driving you to read faster to see just who would kidnap a teenage blue blood.

Misguided Angel also ramps up the action compared to the previous Blue Blood books. With the loss of Bliss in the Van Alan Legacy you just knew that there was going to be a new character introduced in this book. The series is always told around three main characters, so you knew that de la Cruz was either going to introduce someone new to continue on where Bliss left off or suddenly change the format of the series (which I didn’t think would happen).

There are also little excerpts of Venators back in the 15th century hunting down silver bloods and end up finding humans that are marked with the sign of Lucifer. This sub story gives us bits and pieces of details about what is happening, but leaves enough unsaid to keep the reader wanting more details.

Misguided Angel won’t disappoint fans of the Blue Blood series.
Posted by Scott Wilson at 2:07 AM