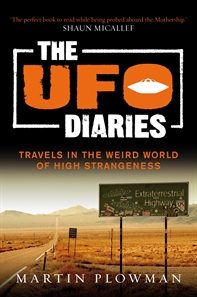 A funny, weird and hugely entertaining memoir of travelling around the world in search of UFO landing sights, UFO believers and abductees.

When postgrad student Martin Plowman became fascinated by the weird world of UFOs, alien abductions and conspiracy theories, he didn't realise it would lead to an amazing seven-year journey that would take him thousands of kilometres across the world.

In his quest to uncover the mystery at the heart of people's fascination with UFOs, Martin met surprisingly grateful alien abductees in Mexico, reluctant UFO 'witnesses' in Roswell and secretive mountain ufologists in Chile.

Both funny and profound, The UFO Diaries is the kind of book Bill Bryson and Douglas Adams might've written if they'd been abducted on the same flying saucer. Part travelogue, part memoir, part social history, it won't matter whether you believe or disbelieve in UFOs - you'll just be dazzled by your journey into the world of high strangeness.

Martin Plowman became interested in UFOs as a child. While he's a non-believer he decided to write his Cultural Studies PhD in the phenomenon of Ufology. When he received his PhD he made national news, including The Age, the SMH, The Australian, The Herald-Sun, MX, The Canberra Times, Channel 10 news, Sunrise, a dozen radio stations all over the country and even Irish radio. He lives in Melbourne and has been known to wear a flanno, but has never been seen in public wearing Ug boots.

Let me start by saying that the author does not believe in UFO’s, so if you are worried that this book is going to be written by someone with weird and wonderful beliefs, be at ease. Plowman has taken seven years to write this book and done extensive research into the fascination with aliens and UFO’s. I actually became interested in reading this book because of the comment that Shaun Micallef wrote about the book stating it was quite humorous.

Plowman conducts interviews with people all around the world who claim to have been abducted by UFO’s or have witnessed in Roswell and Chile.

Apart from the factual information collected by Plowman the book is written in a humorous and light hearted manner, making if very different from any other book out there on UFO’s. The book is written like a travel diary of the author’s adventures in search of those who claim to have had encounters out of this world.

Not a bad, light read with a twist of humour.
Posted by Scott Wilson at 9:11 PM