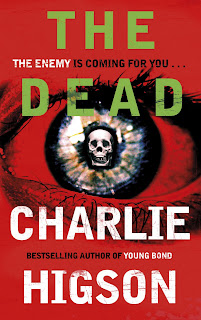 A terrible disease is striking everyone over the age of fourteen.

Maxie, Blue and the rest of the Holloway crew aren't the only kids trying to escape the ferocious adults who prey on them.

Jack and Ed are best friends, but their battle to stay alive tests their friendship to the limit as they go on the run with a mismatched group of other kids - nerds, fighters, misfits. And one adult. Greg, a butcher, who claims he's immune to the disease.

They must work together if they want to make it in this terrifying new world. But as a fresh disaster threatens to overwhelm London, they realize they won't all survive.

The Dead is a new spin on the zombie genre, with only those over 14 being affected by the zombie plague. While the main characters in this novel are all YA, I think that the book is more suited to the adult audience than the YA audience. As a good zombie novel, there are a lot of dark themes and gore, blood and guts. There are also quite a lot of profanities in the language used by the kids, which is understandable seeing as how they are fighting for their lives. I enjoyed this book very much but would not be giving it to my kids to read due to the language and gore.

The book is set in London where a disease had killed off all adults and turned them into flesh eating zombies. The surviving kids set up base in a local supermarket, yeh I know, not a very original setting for a zombie story but let’s face it, if you were in the same situation a shopping centre has more supplies than most places. After a year of surviving in this refuge, the older youths have to start venturing further from base to find supplies to keep the group alive. They eventually have to leave to find somewhere else, which happens to be Buckingham Palace.

Higson writes a left of centre book with unexpected twists and turns. There are no Red Shirts in this novel as characters get killed off no matter who they are major or minor players. It is a real Lord of the Flies type scenario but with far more danger and excitement for the reader.
Posted by Scott Wilson at 12:38 PM