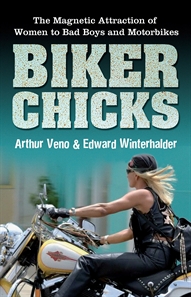 A revealing portrait of the mysterious role of women in bikers' clubs. Popular images of scantily-clad females who are little more than slaves don't do justice to the rich history and culture of the many women who have chosen to ride with their men, or ride in their own right.

The male-dominated world of bikers' clubs has long been shrouded in secrecy, but the role of women in these bastions of testosterone is even more mysterious. Popular images of scantily-clad females who are little more than slaves don't do justice to the rich history and culture of the many women who have chosen to ride with their men, or ride in their own right.

Ever since the first female motorcycle club formed in the 1930s (the 'Motor Maids') with their quaint white gloves and a flourish of colour on their jackets, women bikers have been turning heads. And yet today they are all but banned from joining the male clubs. Then there are those women who are seen as mere accessories for male club-members: the 'ol' ladies', the 'strippers', the 'hang-arounds', and the more hard-core groupies like the 'Biker Sluts', the 'Mamas' and the 'Sweet Butts'. The rules and protocols they must observe are astonishing, though some wield far more power over their men than it would appear.

Biker Chicks brings together numerous personal stories and puts them into context with a thoroughly entertaining history. There's a detailed exploration into the forces and motivations that draw particular women to the bike scene, and on a wider scale, an analysis of what attracts both women and men to its 'Bad Boy' culture.

Biker Chicks is a unique and timely book offering rare and compelling insights into a world that mystifies - sometimes even terrifies - the outsider.

About Arthur Veno and Edward Winterhalder

Professor Emeritus of Criminology and Social Psychologist, Dr Art Veno has specialised in the study of the biker sub-culture in Australia and New Zealand for more than two decades. He is often called upon to serve as an international commentator for media events relating to bikers and the biker subculture. Edward Winterhalder, a former high-ranking American Bandidos Motorcycle Club member, is an internationally renowned biker expert and media personality. Sons of Anarchy, a TV show based on him, began screening in the US in September 2008.

This book will have a very specific market and probably won’t be picked up by many outside of this demographic. It is unfortunate, as there is quite a depth of information about the sort of women that willingly become involved in the seedy underworld of the outlaw biker gangs. I found it absolutely fascinating as to the type of women than got caught up in this dark side of society.

The book is well written and kept me enthralled from the opening page to the final page. As a piece of non-fiction it could have benefited from some more photos and images of the biker clubs, badges and biker chicks. As someone who’s never had anything to do with the biker culture, I found the women discussed similar to groupies from the rock industry, or like women who form relationships with notorious criminals in jail.