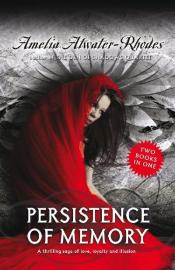 Author:                Amelia Atwater-Rhodes
Publisher:             Random House
RRP:                   $24.95
ISBN:                 9781742750774
Description:
In PERSISTENCE OF MEMORY, sixteen-year-old Erin Misrahe just wants to be like everyone else in her new school. But Erin has more to worry about than passing AP Chemistry or making friends. In times of stress, she has always been overcome by her alter ego, Shevaun, whose violent behaviour wreaks havoc on those around her. Erin can never remember anything about those episodes, and she's grateful to have been spared them for a while. But when a protective friend comes back into Erin's life, he insists that Shevaun is a vampire who actually exists apart from Erin. Shevaun has dangerous allies, like the handsome witch Adjila - and they're determined to sever Shevaun's connection to Erin once and for all. In TOKEN OF DARKNESS, Cooper Blake has everything going for him - until he wakes after a car accident with his football career in ruins and a mysterious, attractive girl by his side. Cooper doesn't know how Samantha got there or why he can see her; all he knows is that she's a ghost, and the shadows that surround her seem intent on destroying her. No one from Cooper's old life would understand what he can barely grasp himself . . . But Delilah, the captain of the cheerleading squad, has secrets of her own, like her ability to see beyond the physical world, and her tangled history with Brent, a loner from a neighbouring school who can hear strangers' most intimate thoughts. Delilah and Brent know that Cooper is in more trouble than he realises, and that Samantha may not be as innocent as she has led Cooper to believe. But the only way to figure out where Samantha came from will put them all in more danger than they ever dreamed possible.
Review:
When you have a human possessed by a vampire and a boy getting too close to a ghost, you would think the book would be long and boring. But Amelia’s two books in one are short, entertaining and thrilling. This book is written and appropriate for all ages. Persistence of Memory is a story about a mysterious vampire and its alter ego. The story flows along quite quickly and is well written.
Token of Darkness is a haunting story about a young boy who has an accident that leaves him able to see a ghost. He quickly becomes quite attached to this ghost and wants to help her battle against shadowy creatures similar to those in the Patrick Swayze Ghost movie.
This book is a definite buy.
Posted by Scott Wilson at 10:49 PM