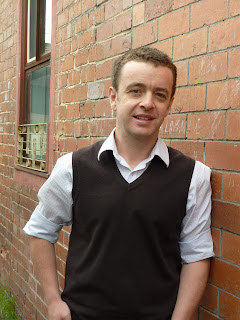 Scott: Thank you so much taking the time to chat with us here at The Fringe magazine. I’ve recently finished reading your latest book, The UFO Diaries, and thoroughly enjoyed it. How has it been received it the market to date?


Martin: The book has been receiving a lot of media attention, most of which has been very positive. It’s interesting tracking the evolving response to the book – in the early interviews the emphasis was on my personal relationship with UFOs, as in “So you’re saying you don’t believe in UFOs?” People really want me to be an Agent Mulder-type of UFO hunter. But as more reviewers read the book they realize I’m not really interested in whether UFOs exist or not. Now I’m getting more questions about the ideas in the book – the semantic and ontological paradox of identifying an object by calling it an unidentified object – and also about the travels I undertook around the world to speak with UFO witnesses. (And no, I don’t believe in UFOs!)

Scott: With the introduction of e-book readers, like Kindle and Sony Reader, there is a current debate about the piracy of e-books and the loss of the print media. How do you feel about e-books?

Martin: It’s almost inevitable that e-books will go some of the piratical way that music and movies have in the last decade or so – once a media goes electronic, it’s simply too easy to copy and pass around. But I think e-books will eventually evolve into a different form of media, in the same way that early online bulletin boards in the ‘90s gave rise to chatrooms and other social networks. At the moment most e-book readers mimic the experience of reading a physical book – you turn virtual pages, leave virtual bookmarks, and then “shut” the covers when you’re done. I reckon this will change, only I can’t say how just yet.

Martin: This book came out of the experience of writing my PhD in Cultural Studies, and it was during those 7 years or so that I learned to write within a fairly strict self-imposed regimen. I think every writer finds their own way to get the words on the page, but ultimately it does come down to a matter of time. For me, writing this book was about sitting in front of the laptop for 2-3 days a week, except for when deadlines approached when it was a lot more. At least 4 hours of solid, non-procrastinating writing time counted as a day; 6 hours was a good day. I would also go to a café and read for at least 2 hours a day, everything from librarian romance novels to ancient poststructuralist French grimoires – don’t ever stop reading if you want to be a writer! Even if I only wrote 100 words, I tried to keep this schedule – sometimes it’s the seemingly empty thinking time spent staring at the screen that helps later on, regardless of how little work you feel you’ve done.

Scott: What sparked your interest in UFO’s, and the fanatics that are convinced of their existance?

Martin: I first heard about UFOs when I was about four years old. I was in hospital recovering from open heart surgery and my parents had brought in some books to read to me before bedtime. You know, the usual kind of things kids are into: dinosaurs, ghosts, and UFOs (why are kids so freaky?) At the time I think the idea of UFOs absolutely captured my imagination because it said to me, this thing you’re going through, it’s nothing in the scale of things. The world suddenly seemed like a bigger, more mysterious place, and I found myself wanting to be well again so I could get out there and experience more of it. I wasn’t interested in UFO stories all through my childhood, however; it wasn’t until I was at university that, quite accidentally, I discovered a whole bookcase of UFO books at a friend’s party. I realized this alternate world of “ufology” had existed out there all along, and I remember thinking to myself, “Writing a history of the belief in UFOs would make a great PhD thesis.”

Scott: How do you approach your writing, I’d imagine that writing a non-fiction book would be very different from a fictional story?

Martin: I have to admit that not everything in this non-fiction book I’ve written is strictly true … but you could hardly expect anything less when the subject matter is as immaterial and unbelievable as UFOs. I deliberately and with malice of forethought set out to write this more-or-less true account using fictional and novelistic techniques, and I had great fun doing it. Perhaps the greatest difference between writing straight imaginative fiction and a nonfiction memoir was that I already knew the ending before I began the book – everything had already happened, the plot was readymade and all I had to do was retell it. With some minor changes.

Martin: Right now I’m reading Kingsley Amis’ foray into alternate history, The Alteration, a novel set in 1976 England where the Protestant Reformation never happened and the Catholic Church is the greatest superpower on Earth. I’m also reading English comedian Russell Brand’s second autobiography Booky Wook 2, also set in alternate world where he’s worshipped as some kind of godlike figure. I habitually read across a lot of genres, but I guess my “home” genres tend to be in the realm of weird, fantastic, and dark fiction. You’ve put me on the spot; in no particular order, here’s today’s top 5 books (don’t expect the same list tomorrow!):

The works of H.P. Lovecraft

Martin: In Australia where the publishing industry is relatively small, it struck me that publishers were a bit cautious taking on unusual book projects (like mine!). On the other hand, it also strikes me that many people in the publishing game are secretly romantics at heart – they live in hope that the next book they commission will be the On the Road for the Internet age. Firstly, I’d say don’t turn up empty handed – make sure you’ve actually got something written to show them! But more importantly, believe in your work – and I don’t mean brag about how amazing your writing is, don’t act the mercurial genius just for the sake of form – but live the conviction you must surely feel that your work is something else, something that can exist outside of you, something that people you don’t know and will never meet will one day read. Also, make sure to go to the toilet beforehand.

H. P. Lovecraft: Dead, and hating it. But by all accounts old Howard hated life too. Probably scratching “Welcome to R’lyeh” on the beach with a stick, or with one of the other castaway’s femurs.

Jacques Lacan: Is he real, or is he Real? Has anybody ever understood anything Lacan ever said? At least if were a shambling zombie it’d be easy to sneak out of his seminars.

China Mieville: Not dead (thankfully), but if he were he’d still have the most scintillatingly febrile imagination on the island.

J.K. Rowling: Not dead either! But Joanne would be there to remind the rest of us that great writing can live on beyond a writer’s lifespan, regardless of hype, endless movie adaptations and countless imitators.

This is starting to morph into a reality TV scenario – right, so I wouldn’t be stuck on the island myself, I’d be a co-host sharing a plush cabin along with Herman Melville in the producer’s yacht anchored off the other side of the atoll. Herman and I would watch the undead authors via satellite and make silly observational puns like, “Well, it looks like our undead castaways are having a whale of a time!” and, “Wow, if these zombies ate any more shrimp we could call this show ‘Licence to Krill’”

Cheers! I look forward to reading it too … er, I mean writing it. Or paying a spirit medium to ask Harry Houdini to write it from beyond the grave, maybe.
Posted by Scott Wilson at 1:46 AM