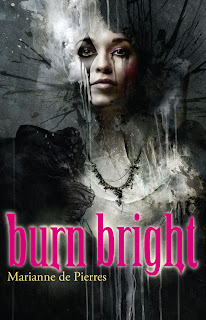 Braving the pain of her obedience strip to escape the only home she's ever known, Retra finds herself drawn deeper into the intoxicating world of Ixion. Come to me, whispers a voice in her head. Who are the Ripers, the mysterious guardians of Ixion? What are the Night Creatures Retra can see in the shadows? And what happens to those who grow too old for Ixion?

Retra will find that Ixion has its pleasures - but its secrets are deadly.
Reviews
'Brilliant storytelling. Riveting and unforgettable.' Lauren Kate, author of FALLEN

‘In Ixion, Marianne de Pierres has constructed the perfect metaphor for teenage anxiety: a foreign world loosed from all past certainties, inhabited by symbolically costumed cliques engaged in complex hostilities. Your worst fears lurk just off the poorly lit paths, and the only relief comes from the brief sleep of the petit nuit, or in surrendering yourself to the music that throbs through the clubs. Read BURN BRIGHT and feel a shiver of recognition, even as Ixion's strangeness casts its spell.’ Margo Lanagan, author of TENDER MORSELS

‘To enter the endless night of Ixion is to enter a darkly glamorous world in which danger and pleasure dance to an intoxicating beat - as irresistible to us as it is to Retra.’ Isobelle Carmody, author of THE OBERNEWTYN CHRONICLES
Review:
Burn Bright is a YA novel written by Sci-Fi master Marianne de Pierres. The world created in this novel is fully of colourful characters and dangerous settings. When you live in a world where strangers make all of the rules, there is bound to be rebellion. But there’s hope on an island, called Ixion, where teens go to be free. Ixion, does not have adults, and there are mysterious Night Creatures lurking in the shadows.
Yet as Retra enters the haven in search for her free will brother it’s clear that things are just not right. Burn Bright is very entertaining and well written.
Posted by Scott Wilson at 10:13 PM