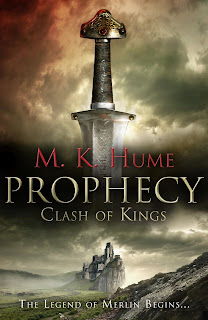 Review:
After a trilogy of Historical Fiction novels about King Arthur, K M Hume has begun a new trilogy about Merlin in the same spin. Prophecy starts of the trilogy with a strong novel, similar to the Arthur trilogy with a variance to the common legend and folk lore.
Hume creates strong and interesting characters, some familiar and some new to the reader. I was slightly disappointed with the final book in the Arthur series and tempted to give this new series a miss for fear of disappointment. I’m glad that I gave this book a go as it returns to the fine form that Hume began the previous series with.
The best thing about this novel is the freshness of the well worn mythology. If you picked it up thinking that it would be just another retelling of the old Arthurian tale, then you would be quite surprised.  This is the start of a great trilogy.
Posted by Scott Wilson at 11:44 PM