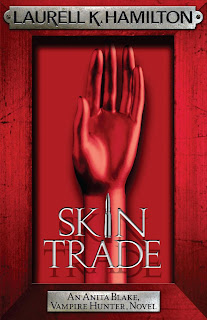 Title:                     Skin Trade
Author:                 Laurell K Hamilton
Publisher:             Headline
RRP:                    $22.99
ISBN:                  9780755352555
Release Date:       June 2010
Pages:                  608
Description:
Headline is thrilled to be publishing the sensational New York Times bestselling author Laurell K. Hamilton, the queen of vampire fiction.
The sensational novel featuring vampire-hunting heroine Anita Blake.
Anita Blake s reputation has taken some hits. Not on the work front, where she has the highest kill count of all the legal vampire executioners in the country, but on the personal front. No one seems to trust a woman who sleeps with the monsters. Still, when a vampire serial killer sends her a head from Las Vegas, Anita has to warn Sin City’s local authorities what they’re dealing with. Only it’s worse than she thought. Several officers and one executioner have been slain paranormal style...
Anita heads to Las Vegas, where she s joined by three other federal marshals, including the ruthless Edward hiding behind his mild-mannered persona. It s a good thing Edward always has her back, because, when she gets close to the bodies, Anita senses 'tiger' too strongly to ignore it. The were-tigers are very powerful, which means the odds of her rubbing someone important up the wrong way just got a lot higher...

Review:
Skin Trade is the seventeenth book in the Anita Blake Vampire Hunter series.. Well here we are with another great instalment of Anita Blake. Things have certainly changed since the first that’s for sure. Though Anita still has enemies, they seem worse (if possible), One even has the nerve to send an unknown head, yes head to Anita. This case might just be too close to home for Anita and some loved ones may get hurt.
The main characters in this book are, Anita Blake – the vampire executing zombie maker, Edward – Anita’s closest friend and advisor, Olaf – A strange and creepy guy who has a crush on Anita, Bernardo Spotted Horse – the flirty muscle that is the only person Anita can count of for backup, Crispin – A Vegas white tiger, and Max – Master Vampire of Las Vegas.
Some great characters that make this book even better than the previous instalments, even though they were brilliant.
Posted by Scott Wilson at 8:39 PM