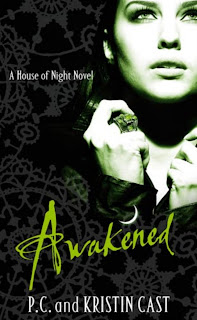 The next exciting instalment in the bestselling House of Night series.

Zoey and the gang are back fighting evil (well, duh, that s what being a High Priestess is all about) but with a variety of romantic intrigues to distract them it s a wonder they can get anything done! Zoey s got some serious work to do at the House of Night if only she could concentrate . . .

Awakened is the eighth book in the House of Night series by Mother/Daughter team of PC and Kristin Cast. I’ve read quite a lot of bad reviews about this book on the net lately, saying that the series has gone on for too long, the relationships and dialogue just aren’t believable, too many references to pop culture, giving away spoilers for True Blood Season 3, etc, etc. Anyway, not sure why people buy books if they say they lost interest in a series after the first couple of books????

Book eight sees Zoey wrestling her internal conflicts of responsibility and love, while her friends are having severe problems of their own. Stevie Rae is still hiding her beau, Kalona is incarcerated for his failure, Neferet grows even nastier than normal, and the entire House of Night is rocked by a tragedy. I also really liked what was going on with Stevie Rae and the raven mocker it was nice sub plot is resolved in this book.

The Stevie Rae and Rephaim issue worked out really well in my opinion and the choice they made was perfect. The way their relationship grew in this book was my favorite part, even though it was pretty obvious what was going to happen. Zoey and Stark have finally reached peace as well.
Posted by Scott Wilson at 2:46 PM