BOOK REVIEW: Wither: Book One of the Chemical Garden 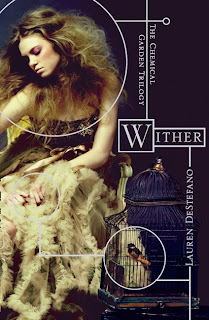 Title: Wither: Book One of the Chemical Garden

When sixteen-year-old Rhine Ellery is taken by the Gatherers to become a bride, she enters a world of wealth and privilege. Despite her husband Linden′s geniune love for her, and a tenuous trust amoung her sister wives, Rhine has one purpose: to escape -- to find her twin brother and go home.

But Rhine has more to contend with than losing her freedom. Linden′s eccentric father is bent on finding an antidote to the genetic virus that is getting closer to taking his son, even if it means collecting corpses in order to test his experiments. With the help of Gabriel, a servant she trusts, Rhine attempts to break free, in the limited time she has left.

Rhine is a 16-year-old girl and the narrator of the story, who has been sold as one of three new wives to a wealthy man who's first love and current wife is dying. She has an absolutely gorgeous mind from which she describes the richness around her and though not all of that richness is positive it is fully tangible by the time she finishes. Ms. DeStefano has such a way with phrasing that it often made this sci-fantasy sound like literature a la Jane Austen or Charlotte Bronte.

Scientist thought they have finally figured out a way to genetically engineer superior children. These children would not get sick and would be virtually immortal. They were mostly correct. The second generation of superior children were stricken with a virus and now females are all dying around the age of 20 and men at 25. Now women are being kidnapped and sold into marriages so that they will bear children before they succumb to the virus. Rhine is kidnapped and sold with two other girls to 20 year old Linden Ashby. On one hand Rhine has been removed from a life full of hardship to one where she is surrounded by luxury, and despite the whole kidnapping thing Linden Asby isn't so bad. On the other hand she was kidnapped and Rhine does not want to live her last four years of life as a slave in a polygamous marriage.

The other characters in the story are distinct and unmuddled as can sometimes happen in a first person narrative because the narrator doesn't know the feelings or thoughts of those around them. But Rhine is so adept at observing, reading, and understanding people that all of the characters spring to life in full color on the pages. Cecily, though a somewhat bratty and precocious 13-year-old sister wife, is lovely as is Jenna, the 18-year-old sister wife, who's lively gray eyes miss nothing and wisdom comes in handy a great deal for Rhine. Housemaster Vaughn, the supposed villain, House Governor (and husband) Linden, Gabriel, the domestics (children bought to serve each sister wife), the kitchen staff, and the party goers all resonate as real people with real feelings, thoughts, and motivations. Ms. DeStefano should be proud of her ability to make each person, however small their role, unique and multi-dimensional. The only small negative I could mention on that front is her lack of characterization of Rowan, Rhine's fraternal twin brother.

The story moves and flows fluidly from page to page and I found myself lost in it as though I weren't actually reading but was living there in the mansion with Rhine and her sister wives. A feat for someone like me who has ADD and is easily distracted away from books I want to read! I didn't want the story to end and yet, when it did, I was pleased that Ms. DeStefano wrote it in such a way that it could actually stand alone, though I know it's a trilogy. I could be happy with the ending even if I never get to read the other two books.
Posted by Scott Wilson at 12:34 AM