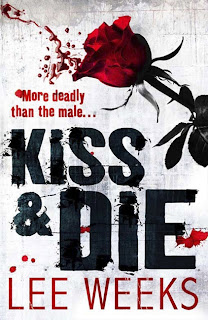 Ruby is looking for love-- but her kiss is deadly! A serial killer is on the loose and it appears to be a woman--her target, adulterous businessmen. After picking them up in bars, she brutally tortures her victims before decapitating them. Meanwhile, Hong Kong detective Johnny Mann is still struggling to deal with his dead father's legacy of corruption and triad involvement. His nemesis CK Leung is determined to bring Johnny into the triad fold and has now deployed the most dangerous weapon--his daughter Victoria--beautiful but deadly. Falling into a downward spiral, Johnny is on the verge of destroying everything he holds dear while Ruby continues her terrifying murder spree. Johnny needs to pull himself together fast, because Ruby is getting nearer and is closing in for the kill! A nerve-shredding thriller that will grip fans of James Patterson and Karen Rose

We are still in Hong Kong, Mann is still trying to overcome the murder of his only true love (in book one) and he is still up against the unemotional and lethal CK Leung, head of the main Triad group.

In this book, there is a second and far more brutal storyline taking place: a serial killer is making inroads into the travelling businessmen population who trawl the bars for a 'good time'. Ruby provides the hope of such expectations with a gory and terminal ending. It is not clear as to her motive in all this but, eventually, when it's rather too late, we do discover who she is and why she does what she has to do.

Added to all this, if wasn't enough for the long-suffering Johnny Mann, he has to fend off the less than amorous advances of CK's exceptionally beautiful daughter, Victoria, who, it seems, can run rings round her father's old-fashioned way of dealing with his troublesome enemies (and friends).

All-in-all, Ms Weeks has built up well the character of her protagonist but whether he will survive another outing remains to be seen. Some doors close in this book but others remain open but will Mann be able to cope? Probably. In any event, I shall await next year's release with some enthusiasm to see where we go this time.

The fourth in the Johnny Mann series, and probably the most violent to date. Not recommended for those of a nervous or squeamish disposition since it contains vivid and detailed descriptions of torture and murder by a serial killer. Never the less, Johnny Mann achieves further progress in his fight with the triads and his nemesis CK Leung. Another page turner from Lee Weeks.
Posted by Scott Wilson at 12:51 AM