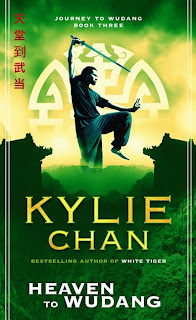 Human and demon, heaven and hell battle for the fate of the world in this fabulous bestselling series ... The demons that could control stones and elementals have been defeated, but the most powerful of Simon Wong′s associates still remains to create almost undetectable copies of humans and Shen. This demon allies with Kitty Kwok to prepare a torturous trap for Emma and Simone from which they may never return.Wudang Mountain is enveloped by dark foreboding as Xuan Wu begins to reappear -- sometimes human, sometimes turtle, but always without memory. Emma and Simone are in a race against time as they try to rescue Xuan Wu ... before the demons capture him.

Praise for Kylie Chan: ′a rich tapestry of culture, action and love′ HORRORSCOPE

This is the final volume of the Journey to Wudang, and it completes the second series in a satisfying manner. We had to expect it to end with a few loose ends, given that Kylie Chan has already stated that there will be a third trilogy to complete the story of Emma Donahoe and her family. Heaven to Wudang is the sixth book about Emma, John, Simone and Leo and although it’s supposed to be the final book of the second trilogy, it doesn’t come across that way.

I love the colourful world Kylie Chan created in this series with the use of Chinese mythology. This is very different from other European mythology-based fantasy novels that many of us have already read a stack of. It’s her world that draws me to these stories and keeps me coming back.

If you have enjoyed the previous books in this series, then you will enjoy the last in the latest trilogy, but be warned, there will be more books continuing the series.
Posted by Scott Wilson at 12:29 AM