BOOK REVIEW: Those in Peril 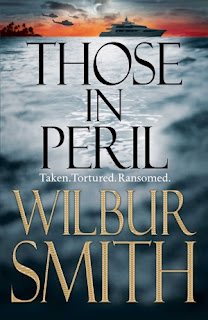 Title: Those in Peril

Another outstanding adventure from one of the world's best loved storytellers

Hazel Bannock is the heir to the Bannock Oil Corp, one of the major oil producers with global reach. While cruising in the Indian Ocean, Hazel's private yacht is hijacked by African pirates. Hazel is not on board at the time, but her nineteen year old daughter, Cayla, is kidnapped and held to ransom. The pirates demand a crippling twenty billion dollar ransom for her release. Complicated political and diplomatic considerations render the civilized major powers incapable of intervening.

When Hazel is given evidence of the horrific torture which Cayla is being subjected to, she calls on Hector Cross to help her rescue her daughter. Hector is the owner and operator of Cross Bow Security, the company which is contracted to Bannock Oil to provide all their security. He is a formidable fighting man. Between them Hazel and Hector are determined to take the law into their own hands.

Wilbur Smith was born in Central Africa in 1933. He was educated at Michaelhouse and Rhodes University. He became a full-time writer in 1964 after the successful publication of When the Lion Feeds, and has since written over thirty novels, all meticulously researched on his numerous expeditions worldwide. His books are now translated into twenty-six languages.

Those in Peril deals with a very topical subject, modern-day piracy. The private yacht of a rich oil baroness, Hazel Bannock, is hijacked by pirates and her daughter held for ransom. When legal means of recovering her daughter prove fruitless, she turns to the ex-military head of her private security; a man she doesn’t trust or respect, but who will take actions that governments can’t or won’t.

The main character, Hector Cross, is an intelligent strong willed man of action who is employed as head of security for an oil company. Hazel Bannock is a strong, independent widow who inherited the company from her late husband and has since greatly increased its worth. When the yacht carrying Hazel's daughter Cayla is attacked and Cayla is kidnapped for ransom, the action really takes off. Hector plans, coordinates, and executes the mission to rescue Cayla. Along the way he and Hazel and his team have to deal with betrayal by someone they trusted, gun fights, car chases over brutal terrain, and injury to those they care about. Around the middle of novel, after I thought the action part was over, a new round of action begins as Hector and Hazel put in place a plan to exact revenge on those responsible for horrendous acts.

It is well written, sometimes with brutal and chilling descriptions of the violence, but also with good description of how living through the dangerous events draws the main characters together and sparks romance and lasting relationships.

Overall I would recommend this novel to anyone interested in a good action thriller. I noticed that Wilbur Smith has written quite a few other novels, and I would like to read more from this author.
Posted by Scott Wilson at 2:31 AM