BOOK REVIEW: The Inspector and Silence 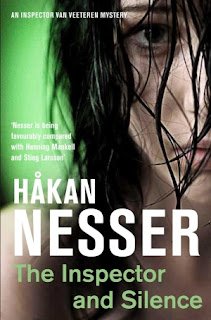 Title: The Inspector and Silence

In the heart of summer, the country swelters in a fog of heat. In the beautiful forested lake-town of Sorbinowo, Sergeant Merwin Kluuge's tranquil existence is shattered when he receives a phone-call from an anonymous woman. She tells him that a girl has gone missing from the summer camp of the mysterious The Pure Life, a religious sect buried deep in the woods. Chief Inspector Van Veeteren is recruited to help solve the mystery.

But Van Veeteren's investigations at The Pure Life go nowhere fast. The strange priest-like figure who leads the sect–Oscar Yellineck–refuses even to admit anyone is missing. Things soon take a sinister turn, however, when a young girl's body is discovered in the woods, raped and strangled; and Yellineck himself disappears. Yet even in the face of these new horrors, the remaining members of the sect refuse to co-operate with Van Veeteren, remaining largely silent.

As the body count rises, media frenzy descends upon the town and the pressure to find the monster behind the murders weighs heavily on the investigative team. Finally Van Veeteren realizes that to solve this disturbing case, faced with silence and with few clues to follow, he has only his intuition to rely on...

Hakan Nesser is one of Sweden's most popular crime writers, receiving numerous awards for his novels featuring Inspector Van Veeteren, including the European Crime Fiction Star Award (Ripper Award) 2010/11, the Swedish Crime Writers Academy Prize (three times) and Scandinavia's Glass Key Award. The Van Veeteren series is published in over 25 countries and has sold over 5 million copies worldwide. Hakan Nesser lives in Uppsala with his wife and two sons, and spends part of each year in the UK.

In Håkan Nesser's "The Inspector and Silence," Chief Inspector Van Veeteren (VV) is thinking seriously about calling it quits after approximately thirty-five years in the Swedish police force. He is fed up with "rooting around in the rubbish heaps of his environment." A ridge of high pressure has brought extraordinarily hot weather. VV's irritable and sweat-drenched subordinates banter, curse, and insult one another as a way of blowing off steam. Although he is planning to take a vacation in Crete, a new and disturbing case comes along that calls for VV's unique blend of experience, insight, and intuition.

Van Veetern leaves Maardam and travels to Sorbinowo to help Acting Chief of Police Merwin Kluuge look into the disappearance of a thirteen-year-old girl from a camp run by Oscar Yellinek, the founder of the Pure Life "free-church community." This sect is devoted to cleansing souls and achieving enlightenment through "prayers, self-denial, [and] purity." Since Yellinek, his female assistants, and the adolescent girls staying at the camp are highly secretive, the investigation gets off to a rocky start. VV, who usually chews toothpicks to avoid cigarettes, reverts to his bad old ways. He smokes, drinks too much, and becomes more and more frustrated by his lack of progress.

And to top this off, strange religious cults can be found all over the world and though it may seem unusual to think of Sweden as a place to find one, but it has.

Van Veeteren is a curious and colourful character - ready to give it all up, over the years he's been complaining of becoming increasingly disillusioned with police life & law enforcement. I love it when authors who write novels with a recurring main character give the character some real-life quirks - such as Van Veeteren's penchant for Menthol toothpicks (I used to love those too, still do when I can find them), badminton, is a bit grumpy and cynical, enjoys dark beer and chess.

The storyline is well thought out and planned with a variety of red herrings thrown in for good measure. The characters all play second fiddle to Van Veeteren's protagonist role but the humour and camaraderie of his fellow officers a delight to read - especially Suijderbeck and his artificial leg that stands up during a briefing to proclaim "my artificial leg is itching"!

A great read and one that will no doubt be compared to Steig Larrson.
Posted by Scott Wilson at 2:18 AM