BOOK REVIEW: A Game of Thrones 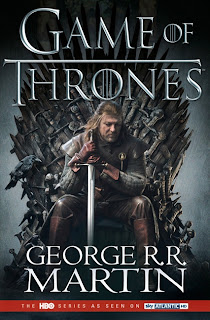 Title: A Game of Thrones

During 2011, the first volume of George R R Martin′s glorious high fantasy will be aired as an HBO series on Foxtel.

Martin unfolds with astonishing skill a tale of truly epic dimensions, thronged with memorable characters, a story of treachery and ambition, love and magic. Set in a fabulous world scarred by battle and catastrophe over 8000 years of recorded history, it tells of the deeds of men and women locked in the deadliest of conflicts and the terrible legacy they will leave their children.

In the game of thrones, you win or you die.

I have never read any of George R R Martin’s books before, and I have absolutely no idea why? It was only when seeing the ads for the new television series and being enthralled that I decided that I just had to give the books a go.

The novel is in a fantasy continent that bears a familiarity to Middle Ages England, Winter is coming. Winter in this world means a sort of mini ice age that will last for seven years before receding. In the always-frosty Northern area, the races of nonhuman beings are gathering to advance with the snows; there are hints that there is an ancient, evil power behind their forces. At the same time in the South, political infighting for the Throne has begun. Overseas, the daughter of the dispossessed former King is manoeuvring forces of her own for a bid for the throne. All this is told through the various stories of both "good guys" and not-so-good guys.

For starters, AGOT can't be accurately compared to any other book or series in the Fantasy genre. The nearest thing of its type is the laborious Wheel of Time series by Jordan - see what I mean? And yet this first in the Song of Ice and Fire series is fathoms above that aimless, droning style. Martin has perfected what Jordan had arguably introduced; the multiple characters' points of view telling the vast saga on an intimate, up-close scale. Never did I feel that I was being strung along, but rather lead by increments toward an incredible revelation somewhere up ahead. Martin builds the suspense masterfully in each book.

But by far the most striking thing about the Song of Ice and Fire is the "rules" that the author breaks. Martin is not afraid to tell the tale from the point of view of some very unlikable, even immoral characters. He is bold about revealing facts from a character's past that challenge one's impressions and assumptions about their ethics. He does not lay all his cards on the table up front, but rather unexpectedly reveals details that later change the whole picture and twist the plot admirably. And his most unusual move: this author even allows "favourites" to die occasionally! These risks pay off well to serve the story as a whole, bring a sense of true humanity to the people of this world and drive the reader on to the next series instalment.
Posted by Scott Wilson at 1:42 AM