Review: Of Saints and Shadows By Christopher Golden 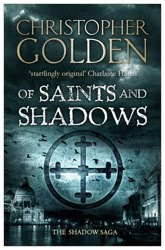 A secret sect of the Catholic Church, armed with an ancient book of the undead called The Gospel of Shadows, has been slowly destroying vampires for centuries. Now the book has been stolen, and the sect races to retrieve it before their purpose is discovered: a final purge of all vampires. As the line between saints and shadows grows ominously faint, private eye Peter Octavian is drawn into the search. And he'll do anything to find the book ... for Peter Octavian is also a vampire.

Ostracized by his kindred for refusing to take part in the 'blood song', he cannot stand by and watch while they are destroyed. In a deadly game with a driven, sadistic assassin, the trail leads to Venice at the time of carnival, where the Defiant Ones, as the vampires are known, are engaged in a savage battle for their lives. Filled with plot twists, mystery, sex and violent death, Of Saints and Shadows is a spine-tingling thriller which opens the door to the world of The Shadow Saga.

I found this book quite by accident and immediately fell in love. This is a completely different take on vampires and is actually my favorite novel - beating out Tanya Huff's series and even the Anita Blake series.

If you like vampire or horror novels you will love this book.
Our hero is Peter Octavian, a vampire called a "defiant one", and definitely one of the good guys. He is a private investigator investigating a missing persons case for a friend of his.

What makes Peter so likeable is that he is a great guy, but he is also all alone. He left his fellow vampires because he did not believe in their beliefs, and struck out on his own. He knows secrets about vampires that could help his vampire family, but no one believes him. They think of him as an outcast.

When you read about Peter, and realize what a good person he is, and how caring he is of humans, his fellow vampires and even the world in general, you really grow to like him. Also he is such a good strong guy, and you empathize with him because he is all alone without anyone to call family or friend.

Peter gets pulled into a missing persons case that will lead him to a conspiracy involving his "family" of vampires, the church, other "evil" vampire clans and a variety of very interesting characters.


This is a very innovative and creative vampire novel. The main idea is that the Catholic church has been controlling vampires and numerous other supernatural creatures for centuries. The church has convinced the vampires through brainwashing that they are vulnerable to things they actually are not vulnerable to, thus making them less powerful than they actually are. A few vampires have somehow managed to avoid this programming and set out to share the word
Posted by Scott Wilson at 11:34 PM

I love this series. Christopher Golden is a wonderful author.