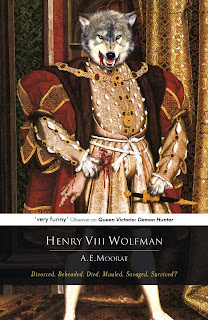 HENRY VIII: WOLFMAN. DIVORCED. BEHEADED. DIED. MAULED. SAVAGED. SURVIVED. Henry VIII was the best and bloodiest King ever to have sat on the throne of England. This fast-paced, exciting, gory, inventive and just plain gross retelling of his reign will bring to light the real man behind the myth. When it came to his size, Henry VIII was known for being larger-than-life, with a fearsome temper and bloodthirsty reputation to match; more beast than human, some might say... Be dragged kicking and screaming back 500 years into Tudor England.

There will be those who like this book because it is a combination of old and new, and those who won’t even pick this up because it is another book hot on the tail of the Pride and Predjudice and Zombies. This one was written so quickly it has a lot of little errors of history and a fair number of types, but it must be said that it moves along fast and is perfect for airplanes or trains or the beach. There is a fair amount of blood and gore to keep the avid horror fan entertained, but it may be a bit much for those not used to this graphic imagery of such novels.

The characterizations of familiar historical figures are always witty and in some cases really clever: Cardinal Wolsey and Thomas More make very memorable appearances. Henry VIII himself is a little ponderous, but then, I suppose he was in real life, too. Very well set up for a sequel, which should, by the way this is written be very soon.
Posted by Scott Wilson at 11:14 PM