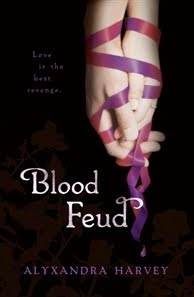 The second heart-pounding adventure in the Drake Chronicles following My Love Lies Bleeding. The Drake family must now confront a new foe when they face a vampire with a 200-year-old grudge, but will love get in the way?

It has been centuries since Isabeau St. Croix survived the French Revolution. Now she's made her way back to the living and must face the ultimate test by confronting the evil British lord who turned her into a vampire and left her buried for two hundred years. That's if she can control her affection for Logan Drake, a vampire whose bite is as sweet as the revenge she seeks...

Alyxandra Harvey is the author of My Love Lies Bleeding, the first book in the Drake Chronicles. She studied Creative Writing and Literature at York University and has had her poetry published in magazines including the Antigonish Review, Room of One's Own, OnSpec and CV2. When not writing, she is a bellydancer and jewellery maker. Alyxandra Harvey lives in Ontario, Canada.

Blood Feud picks up almost immediately after the point where Hearts at Stake ends, with the seven Drake brothers and their sister Solange adjusting to the notion of their mother as the new vampire queen. Hoping to create a new kind of vampire court, Queen Helena and King Liam are attempting to form alliances with both the reclusive Hounds and the Helios-Ra vampire hunters against Montmartre’s Host and the feral Hel-Blar.

Harvey does it again in Blood Feud. She perfectly blends romance, suspense, and action. Her characters are also unique and they really stand out. Isabeau calm, sensible disposition create a character that you know has big secrets. And Isabeau really does which make her all the more intriguing. Logan’s old-fashioned nature makes him fun to read because of the ironic way he blends modern-ness with past traditions and customs.
18-year-old Logan, the Drake’s second youngest son, is tasked with hosting the Hound envoy, Isabeau St. Croix. Like most whose fealty lies with the royal court, Logan knows little about the vampires known as Hounds and most of what he does know turns out to be wholly false, greatly exaggerated or woefully out-of-date. He is immediately drawn to Isabeau and finds that he wants to know everything about the fierce, proud Hound princess.

Isabeau, as it turns out, is almost as ignorant about the Drakes and their court as Logan is about the Hounds. From the minute she arrives at the court with her two fellow envoys, she is kept off-balance by the Drakes’ informal lifestyle and their seeming willingness to form a connection with the Hounds. Isabeau, however, is not so sure the wisdom of such an alliance. Both her life and her undeath have taught her that trusting others most often leads to betrayal.

The developing romance between Logan and Isabeau is just one of the plot lines in Blood Feud and, as much as I enjoyed their story, I found myself just as interested in the description of the machinations inherent in vampire politics, the exploration of the Hounds way of life, and the nefarious plotting of Montmartre and his lieutenant Greyhaven, who just happens to be the vampire who ended Isabeau’s human life. Flashbacks to Isabeau’s struggles to survive the horrors of the French Revolution add depth to her character and to the story as a whole.
Posted by Scott Wilson at 10:08 PM