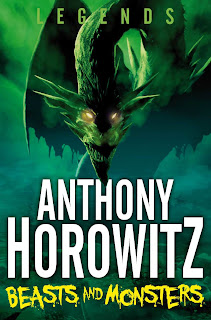 Don't mess with the gods. And if they mess with you? Run like hell...
Including Gorgons, Banshees, Dragons, Sphinxes and more!
There was a time when monsters and dragons roamed the earth and the gods walked among us. A time of blood, swords and furious battles. A time of legends, heroes, darkness and death...

The first in a series of masterful retellings of classic myths from the legendary Anthony Horowitz.

Anthony Horowitz is a prolific writer for film, theatre and television, but he is best loved for his brilliant children's stories, which include the internationally best-selling series about teenage MI6 agent Alex Rider. He lives in London and has two teenage sons.

Mythical creatures have been lurking in our cultural woodwork for centuries, and Anthony Horowitz is happily reimagining their classic tales in Legends: Beasts and Monsters.

The Dragon and Saint George, The Sphinx's Riddle, The Legend of Medusa and The Heroism of Perseus...Horowitz gives each his own personal tweak and polish, retaining much of what made the originals so iconic while giving the stories a welcome update and dusting. It's obvious he's having a lot of fun with this collection, especially with the featured illustrations and his mini-quiz of monsters at the end of the book.

While it's somewhat disappointing that all of the included stories are from Western cultures--one is Native American, the rest are European--Horowitz's choices are among the cream of the crop when it comes to exciting and inspiring myths. (The mini-quiz is a bit more egalitarian in its scope, however.) Legends: Beasts and Monsters will serve as a gateway for younger readers to explore the vast amount of mythology stories on the shelves. Horowitz' series is going to be popular with young readers with movies such as Clash of the Titans and Percy Jackson being big hits recently.
Posted by Scott Wilson at 11:51 PM