Review: Beefheart - Through the Eyes of Magic 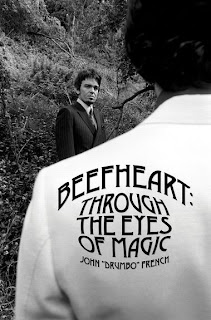 BEEFHEART: THROUGH THE EYES OF MAGIC

A no-holds barred account of working with Captain Beefheart drawing on new reminiscences and interviews with all the key players from the inside and around the Magic Band and the cross pollinated Mothers of Invention.

John French is better qualified than anyone to talk about Beefheart, joining the Magic Band in 1966 at the age of 17 just before recording their Safe As Milk debut album, finding himself plunged into a tyrannical regime which would dominate his life for the next 14 years as he played a major role in eight subsequent albums, including translating the mindblowing avant-blues assault of 1969's Trout Mask Replica into readable music for the Magic Band from the Captain's piano poundings under torturous conditions he likens to a cult

You don’t have to be a fan of the Magic Band to enjoy this book. If not, I can imagine that you might come out of it wanting to explore the music, such is the dedication and detail with which French describes his journey from teenager onwards at the heart of a unique and unreplicated musical process, and with the help of an exceptional discography companion at the end.

If you are a fan of who you think is Captain Beefheart – the man or the myth, or a little of both – you might be advised to approach this book with care, because whilst some indications of an uncomfortable ‘other thing’ were there – as I experienced it, through articles and Mike Barnes’s biography (I haven't yet read Lunar Notes) – nothing could prepare a dedicated fan for the extent of the scenes described in this book. But that’s the point – this is Beefheart, through the eyes of Magic, and it’s an amazing journey of discovery.

As a well known cohort of Frank Zappa’s, Beefheart revolutionized a form of bizarro rock that came from the high deserts of California and took Don and the Magic Band around the world over three multi-colored decades. John French (given the moniker ‘Drumbo’ during the sessions for the famed ‘Trout Mask Replica’ album) sat behind the drums for Beefheart for eight albums, (beginning with ‘Safe as Milk’) and has recounted the behind the scenes going-ons throughout discombobulated recording sessions and wild global romps that solidified the Captain’s image in the hearts of fans of rock’s outer fringes for years.

There is an incredibly detailed social and historical perspective on the development of the local bands in the desert where French grew up, a seeming antidote to newly built settlements in barren surroundings. He describes three generations of musicians who contributed to the Magic Band lineups over a decade and a half, and he interviews many of them, including those who resolutely remained on the outside of the increasingly claustrophobic and isolated unit. It’s one story of mid-20th century American youth and you really feel the essence of French as a child / teenager – and see how that changes as he grows older.

There are some interesting appearances, both on and off the road, including Ornette Coleman, Wild Man Fischer and Jim Morrison, but they are just that – cameos. You get the impression French yearned for more contact with musicians outside his immediate circle, but was denied it. My admiration for Frank Zappa, who as you’d expect comes and goes throughout the book, only grew through reading this book. He comes across as an incredibly talented, intelligent man who wasn’t afraid to let his musicians experiment and express the talents they had. A complete dude.

What was the thing I read Beefheart said, that after recording the album, they had to exorcise the trees?

Similar themes continue throughout the book, but never in the same ways. In frightening, insidious, joyful events and conversations, through French growing older, not playing music, returning to the Captain, separation, re-connecting with his religion, fatherhood, purging the magic, and beyond.
Posted by Scott Wilson at 11:01 PM