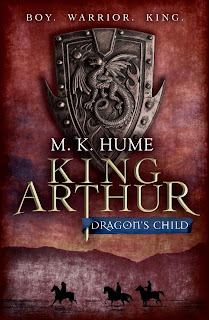 The epic tale of the man destined to become Arthur, High King of the Britons. The Dark Ages: a time of chaos and bloodshed. The Roman legions have long deserted the Isles and the despotic Uther Pendragon, High King of Celtic Britain, is nearing death, his kingdom torn apart by the jostling for his throne. Of unknown parentage, Artorex in growing up in the household of his foster father Lord Ector. One day, three strangers arrive and arrange for Artorex to be taught the martial skills of the warrior; blade and shield, horse and fire, pain and bravery. When they return, years later, Artorex is trained in the arts of battle. The country is in desperate straits for the great cities of the east are falling to the menace of the Saxon hordes. Artorex becomes a war chieftain, and wins many battles that earns him the trust of his Celtic warriors. But if he is to fulfill his destiny and become the High King of the Britons, Artorex must find Uther's crown and sword. The future of Britain is at stake.

About the author
M.K. Hume

Marilyn K. Hume is an Australian author, born in 1948, and based in Brisbane, Australia.

Hume graduated as a teacher in 1967, specializing in Art and Ancient History before commencing teaching high school students. While teaching, she studied university courses as an external student in English and Ancient History. Along the way, Hume obtained a BA, an MA, a Master of Literary Studies degree and a Phd in Arthurian Literature.

In 1996, Hume was encouraged to enter an historical romance writing competition conducted by the Random House Publishing Group under the sponsorship of a popular women’s magazine. Hume had no interest in romance writing, but she dashed off a novel based on her family history. The novel won second prize from a massive field of recognised authors - and she won $5,000 for her efforts.

In 2007, Hume retired from the Queensland Education Department, and immediately commenced to write a trilogy based on the life and times of King Arthur of Britain.

Hume’s agent, the Dorie Simmonds Agency in London, brokered a contract with Headline Review to publish the three books in the trilogy. This agreement soon became six books, for Hume soon produced a further trilogy on the life and times of Merlin, which is now a prequel to the Arthurian trilogy.

Her works are now published at six-monthly intervals, and the author maintains a punishing schedule involving eight hours of research and/or writing every day. She doesn’t believe that there is any such thing as ‘writer’s block’, and loves the whole creative process.

Hume intends to write at least 30 novels before ‘she drops off the perch’. She reads voraciously and adores meeting friends, attending rummage sales, making porcelain dolls and painting portraits.

Hume’s take on the Arthurian Legend takes us down a path of interesting twists and turns, building upon the well known tale. Viewers of the television series, Arthur will most likely be confused by the addition of a major Roman cultural element to the story and wonder if they’ve picked up the right book.

Arthur is shown in a different context to the usual son of the King growing up in a castle, surrounded by knights and maidens. Hume even goes so far as to calling Arthur, Artorex in the book, which may also throw the reader out of the story if they aren’t expecting it.

That being said, if you are aware of the author’s take of this well-known legend and are happy to read a rewritten myth, then you will be in for an exciting ride. You can fully appreciate that Hume does a lot of research for her historical fantasy books by the extensive descriptions and details of medieval life.
Each character in this book has been thoroughly fleshed out, with intricate personalities given to those characters the reader is already familiar with.

If you enjoy historical fiction, then you will love this book and the well constructed plot and background.
Posted by Scott Wilson at 8:32 PM