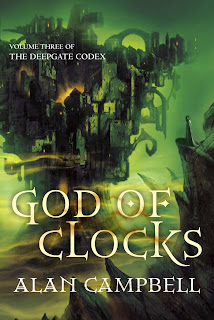 The gates to Hell have been opened, releasing unnatural creatures and threatening to turn the world into a killing field. In the middle, caught between warring gods and fallen angels, humanity finds itself pushed to the brink of extinction. Its only hope is the most unlikely of heroes...

Former assassin Rachel Hael has rejoined the blood-magician Mina Greene and her devious little dog Basilis on one last desperate mission to save the world from the grip of Hell. Carried in the jaw of a debased angel, they rush to the final defensive stronghold of the god of clocks – pursued all the while by the twelve arconites, the great iron-and-bone automatons controlled by King Menoa, the lord of the maze.

But the strange fortress of the god of clocks is unlike anything they could ever have expected. And now old enemies and new allies join in a battle whose outcome could end them all...

Alan Campbell was born in Falkirk and went to Edinburgh University. He worked as a designer/coder on the hugely successful Grand Theft Auto video games before deciding to pursue a career in writing and photography. His first Deepgate volume was Scar Night, and he now lives in south Lancashire.

Throughout this trilogy, I really like how Campbell gives each of the books their own 'feel'. Each one deals with a very different aspect of his universe; the first is primarily Deepgate; the second is Hell; and the third is time travel.

My only issue with this book is the ending. I believe it felt a bit rushed and slightly anti-climatic. I'm actually wondering if he does extend this series beyond this book.

Interesting series as a whole. Campbell is really good at imagining and describing these fantastic worlds, but I think that it's also his weakness. He seems to be more interested in developing the world and his vivid descriptions at the expense of the plot. As things start to get interesting, he pauses to describe everything around the characters, and it causes the story to slow down and break up.
Posted by Scott Wilson at 12:49 AM