Something Is Out There Review 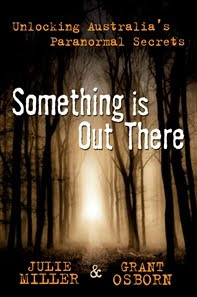 Strange lights in the sky... Menacing footsteps in the bush... Things that go bump in the night... Come on a weird and wonderful journey inside the world of the paranormal in Australia.

Join Julie Miller and Grant Osborn as they enter the strange sub-culture of ufologists; sky-watchers who chase flying saucers and extraterrestrial craft in the hope of a close encounter. On a quest to find the truth about UFOs, Julie and Grant travel from isolated mountain peaks to a remote spot in the dead heart of the outback labelled the 'Roswell of Australia'. Along the way they discover government cover-ups and top secret X files guarded by mysterious men in black...
Not all strange creatures come from outer space. Monsters are said to stalk Australia's forests, mountains and rivers - elusive species fanatically hunted by pseudo-scientists known as cryptozoologists. Miller and Osborn enter their whacky - sometimes scary - world, in search of Australia's answer to the Loch Ness Monster, sharks bigger than the star of Jaws and primeval big cats who drop from trees to attack their victims.

While such scary creatures stalk the landscape, committed ghost hunters and psychic investigators stalk creaking corridors trying to find proof of goings-on from the 'other side'. Miller and Osborn join these seekers of the supernatural, spending a night in Australia's most haunted house and venturing through spectral graveyards and abandoned train tunnels in Australia's most haunted town.
Something is Out There recounts the hair-raising adventures of two intrepid writers on a frightening otherworldly mission - to find evidence of paranormal activity.

About Julie Miller and Grant Osborn
Julie Miller is an award-winning travel writer and freelance journalist, contributing to the Sydney Morning Herald, Qantas magazine, American Express Platinum, Inside Sport and Holidays with Kids. She also works in television, producing, script writing and script editing. Grant Osborn is an award-winning television producer and writer who contributes to a diverse range of local and international TV programs including Gladiators, Mythbusters, One Step Beyond, Catalyst, Real Prison Breaks, Big Brother, The Great Outdoors, Guerrilla Gardeners, Food Investigators and My Kitchen Rules. He also writes regularly for Suite 101, specialising in travel and B-grade movie reviews.

This book contains many very brief accounts of the supernatural places around Australia. While there is a treasure trove of places and events described in this book, I would have liked a tad more detail about each encounter the authors wrote about. Some of the places are only a one page briefing on the history of the legend behind the famous, and infamous locations in this great nation of ours.
I found the many sections of this book to be extremely interesting, and hadn’t heard of many of the haunted houses and buildings described. Julie and Grant sound like they had a fantastic time travelling across the country in search of paranormal activity and evidence. If they made a tv series about their journey, I’m sure it would be a high rating show. Just about every urban legend and documented supernatural even in Australia’s history is contained in the cover of this book.
Posted by Scott Wilson at 4:00 AM