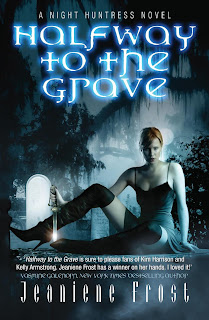 Half-vampire Catherine Crawfield is going after the undead with a vengeance, hoping that one of those deadbeats is her father - the guy responsible for ruining her mother's life. But when she's captured by Bones, a bounty hunter and a vampire, she finds herself forced into an unholy partnership. In exchange for his help in finding her father and still astonished she hasn't ended up as his dinner, Cat agrees to train with the sexy night stalker until her battle reflexes are as sharp as his fangs. But that's not all Bones has to show her - Cat's starting to believe maybe vampires aren't all evil after all, especially ones as cute as Bones. She's half-convinced that being half-dead doesn't have to be all bad. But before she can enjoy her newfound status as confident kick-ass demon hunter Cat finds herself and Bones, hotly pursued by a band of killers. She's is going to have to pick a side - and fast...

Although classed at another paranormal romance, I feel that it was more of a high octane, action packed story with a dose of romance. It was refreshing to see a novel in this genre that did not focus on the romance as the sole basis for the story, but rather added it as part of the overall story. An unlike other stories in this genre, the action scenes were written in a more graphic and gory style with less time spent on the airy fairy romance.

Another element that was refreshing to this novel was the excellent humour that Jeaniene has scattered throughout the book. As I’m writing this, I am thinking more and more that it is misplaced in the paranormal romance genre.

The main character, Catherine Kathleen Crawford "Cat" was half vampire/human and due to her mother's prejudice for all vampires became a vampire killer. When she crossed paths with Bones (Crispin Phillip Arthur Russell III) she discovers a) all vampires are not bad, and b) there are other "things" in the world besides vampires. There was also tons of action with Cat as a kick-ass, yet vulnerable, loveable heroine, and the hero, British bad-boy Bones...oh, be still my heart! If he isn't the sexiest, most romantic vamp of all time--and what a badd-ass sweetheart too! I won't get into the plot as it would be too easy to give away the story, but I will say if you are a fan of JR Ward's BDB or Kresley Cole's IAD series then you would enjoy this series! You won't be disappointed.

The end of the book sets up the rest of the series and I am looking forward to reading it
Posted by Scott Wilson at 1:06 AM