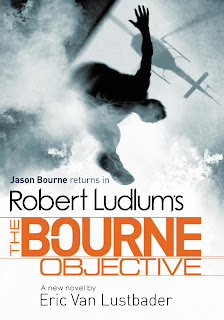 Readers were first introduced to Jason Bourne's nemesis Leonid Arkadin, a brilliant Russian assassin and fearless international mercenary, in THE BOURNE SANCTION. His girlfriend was killed during a fight for which an enraged Arkadin blames Bourne. In The BOURNE DECEPTION, Arkadin hunted Bourne to take revenge and kill him. Bourne, in a fight for his life, learned that Arkadin's skills mirror Jason's because he received the same original CIA Treadstone training. Now, in THE BOURNE OBJECTIVE, Jason will turn the tables and target Arkadin. The hunter will become the hunted. But revenge can cause great psychological devastation. Has this become too personal for Bourne? Will this hunt be Bourne's downfall?

Review
I have been a big fan of Ludlum’s Jason Bourne character for two decades, so I was excited when I first heard about the Ludlum estate allowing Eric van Lustbader to continue the legacy of Bourne. To date, Lustbader has written more Bourne novels than Robert Ludlum 5 to 3.
Van Lustbader has managed to pen another original, fast paced and explosive plot, where we are introduced to new characters as well as the ones we’ve come to know and love, well the few that haven’t been killed off in previous novels.

Bourne Objective, is a continuation of its predecessor Bourne Deception, it’s a riveting carry-over of the deadly chase between Leonid Danilovich Arkadin and Jason Bourne, the result of which will prove who the world's ultimate warrior, along with the hunt for the legendary treasure of King Solomon which results in a penultimate and explosive show-down.

Lustbader has smoothly integrated a certain level of mysticism into a thoroughly modern story; fans of his Eric’s Ninja Cycle will instantly recognise this. If you are a Jason Bourne fan, then you will definitely love this continuation of the series. Even if you’ve never read a Bourne novel before you could pick this one up and enjoy the fast paced action of such a well crafted story.
Posted by Scott Wilson at 12:52 AM