So Cold The River Review 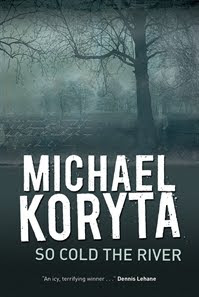 So Cold the River

The restoration of a grand old hotel unleashes an unspeakable evil in a supernatural thriller of unstoppable ferocity and bone-chilling terror. Read it with the lights on ...
Description
It started with a documentary. The beautiful Alyssa Bradford approaches Eric Shaw to unearth the life story of her father-in-law, Campbell Bradford, a 95-year-old billionaire whose childhood is wrapped in mystery. Eric grabs the job, even though the only clues to Bradford's past are his hometown and an antique water bottle he's kept all his life.
In Bradford's hometown, Eric discovers an extraordinary past - a glorious domed hotel where movie stars, presidents, athletes and mobsters once intermingled. Long derelict, the hotel has just been restored to its former grandeur.
But something else has been restored too - a long forgotten evil that will stop at nothing to settle a decades-old score. And with every move, Eric inches closer to the centre of the building storm.
Brilliantly imagined and terrifyingly real, So Cold The River will appeal to fans of Stephen King, Peter Straub and Dean Koontz and readers of masters of investigation such as Michael Connelly, Dennis Lehane and John Connolly.

About Michael Koryta
Michael Koryta is the author of six books, including four Lincoln Perry PI novels and the standalone thriller Envy the Night, which won the Los Angeles Times prize for best mystery. Michael's first novel, Tonight I Said Goodbye - written when he was just 20 - won the Private Eye Writers of America award for a debut crime novel, and was a finalist for the Edgar Award for best first novel. Michael has since been nominated for all manner of prizes including the Shamus and Quill awards. So Cold The River, is a standalone paranormal thriller that is already receiving rave reviews.

A former private investigator, award-winning newspaper reporter and academic, Koryta lives part of the year in Bloomington, Indiana, and the rest in St Petersburg, Florida.
Michael Koryta has earned nominations for the Edgar, Shamus, Barry and Quill Awards, and won the Los Angeles Times Book Prize.

I’d never heard of Michael Koryta before I was lucky enough to receive a copy of his latest novel to review. I’m glad I’ve been introduced to this author now as this is one of the best written supernatural novels I have read in awhile.

The plot is a nice, simple and straight forward one about a washed out movie director who the reader can’t help but dislike, who is hired to investigate the background of a man near death. He doesn't know much aside from that fact that the town from whence he came was famous for its water, which hasn't been bottled for nearly a century. He is given a bottle from way back when. Of course he takes a sip. Bad call.

No kidding--things will go bump in the night, causing you to put the book away until daylight. This, then, is a gripping tale that will have you shivering and reaching for the light switch at every creak in the floor, every knock in the wall.

Michael Koryta has developed a world of fantasy mixed with reality that has you wondering after a while if this really did happen, or if it is indeed fiction. In the backwoods of Indiana, a pair of towns built around a plethora of sulfur springs, have lots of mysterious things going on.

The characters are so well defined that the reader easily feels for them and can’t help but want to keep reading to find out more about them. The plot is solid and reads smoothly from page one to the last.
Posted by Scott Wilson at 3:04 AM