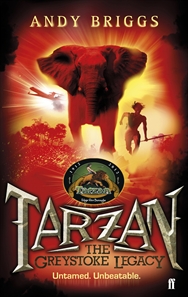 While working in the Congo jungle, teenager Robbie Canler hears rumours of a 'white ape': a feral man, mythical, mysterious and a super-athlete. Could they possibly be true? And if so can the mysterious man help when deaths, fires and danger strike? In this action-packed adventure, the legend of jungle hero Tarzan is reborn for the 21st Century.

What lies in the depths of the jungle? Escaping a dark secret, Robbie Canler joins an illegal logging team in the Congo jungle. Now they're under siege from a sinister force. When the daughter of the camp's boss, Jane Porter, goes missing they assume bloodthirsty rebel soldiers have kidnapped her. Robbie sets out on a rescue mission - unaware he is being watched... Are the rumours of a feral man raised by wild apes true? If so, can the mysterious untamed savage be trusted to help them?

Andy began his writing career working on Hollywood movie projects, such as Freddy Vs Jason and Foreverman for Spider-Man creator Stan Lee and legendary producer Robert Evans. He has written several graphic novels, including the horror-thriller Ritual and Kong King of Skull Island. His first children's books were the eight part Hero.com and Villain.net series for Oxford University Press. He's currently working on several exciting TV and feature projects in between his books. Tarzan has been a passion from childhood and he's thrilled to now be writing and updating the legendary hero.

Tarzan: The Greystoke Legacy is a new take on the original Tarzan story by successful career writer, Andy Briggs. Briggs does a fairly decent job with the characters and the settings, bringing new life into what could be just another tired retelling of a classic story. Tarzan is brutual and barbaraic and it is strange that we don’t actually see as much of him in the novel as you would think. Another difference you may note in the main characters is Jane. She acts and thinks like a much younger Jane than you would probably expect from the movies we have all seen about Tarzan. The friendship between the two is very give and take, but it does seem to work.

Overall, this is a great book to introduce a YA audience to a great fictional character.
Posted by Scott Wilson at 11:04 PM