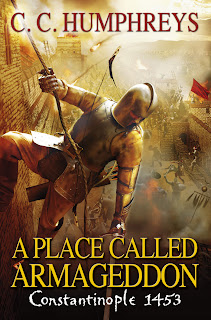 An epic new novel about one of Western civilisation's most traumatic events - the Fall of Constantinople...

To the Greeks who love it, it is Constantinople. To the Turks who covet it, the Red Apple. Safe behind its magnificent walls, the city was once the heart of the vast Byzantine empire.

1453. The empire has shrunk to what lies within those now-crumbling walls. A relic. Yet for one man, Constantinople is the stepping stone to destiny.

Mehmet is twenty when he is annointed Sultan. Now, seeking Allah's will and Man's glory, he brings an army of one hundred thousand, outnumbering the defenders ten to one. He has also brings something new - the most frightening weapon the world has ever seen. And yet, through seven weeks of sea battles, night battles, by tunnel and tower, the defence holds and will until the final assault and a single bullet that will change history...

C.C Humphreys was born in Toronto and grew up in Los Angeles and London. A third generation actor and writer on both sides of his family, he is married and lives on Salt Spring Island, Canada. http://www.cchumphreys.com

A Place Called Armageddon is an epic historical fantasy novel that displays some very well researched and reasonably accurate historical details, such as the weapons, buildings, ships, armies, historical characters. That being said, there are also a great deal of non-historical elements included such as prophecies, mystic books, alchemists and fortune tellers. I can see two schools of thought on this mixture, 1 that it should not have so much fantasy added if it is supposed to be historical fiction, and 2 that it should not use real people and events if it is a fantasy novel.

I found this mixture to be quite an entertaining read and enjoyed every page of this epic novel, after all, even historical fiction is still just fiction. The dramatic landscape the author uses as a backdrop for the action is perfectly written, reflecting the extensive research that went into the history of Constantinople.

This book is a very good read and I’d recommend it to both those who like historical fiction or fantasy.