BOOK REVIEW: Into The Heart of Life 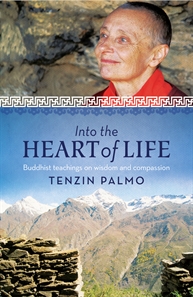 Title: Into The Heart of Life

One of the most inspiring teachers of Tibetan Buddhism shares important teachings on compassion and enlightenment from this ancient wisdom tradition.

Hidden from the rest of the world, high in the Himalayan mountains, the people of Tibet developed a science of the mind over the centuries it took the West to build cars and planes. Forty years ago, Tenzin Palmo was one of the early Western women to meet the lamas coming out of Tibet and to study the Tibetan Buddhist teachings deeply.

In her second book, she invites Western readers into the heart of the Tibetan Buddhist tradition. In her characteristically clear and insightful style, she introduces us to the essential teachings on impermanence, happiness and compassion, and shows how we can use them to enhance our lives. She also shares some of the highest wisdom teachings on emptiness and enlightenment.

Whether or not you are a Buddhist, Into the Heart of Life can help you develop more sanity, wisdom, compassion and fulfillment in your life.

- 'Rarely are Buddhist teachings presented with such vivid immediacy and insight as in this gleaming jewel of a book! Stimulating, challenging and wonderfully motivating, Jetsunma's book will be treasured both by newcomers and seasoned practitioners alike.' -David Michie, author of Buddhism for Busy People

- 'Tenzin Palmo is one of the most genuine and accomplished of Western practitioners.' -Jack Kornfield, author of A Path with Heart

Jetsunma Tenzin Palmo was one of the first Westerners to be ordained as a Buddhist nun in the Tibetan tradition. She spent twelve years in seclusion practising meditation in a Himalayan cave, and the well-known book Cave in the Snow is the story of her life. Known as an inspiring teacher, she is the author of Reflections on a Mountain Lake.

Let me start by saying that I am a Christian and do not believe in the any New Age or Buddhist teachings at all. I wanted to read Into The Heart of Life to gain a better understanding of what a devout Buddhist believes. This book details the forty years of life of such a person, through her personal history, reflections and recounts of her talks and conversations.

Jetsunma Tenzin Palmo was raised in London and became a Buddhist in her teens. At the age of 20, she made a conscious decision to pursue her spiritual path by travelling to India. There she met her guru, His Eminence the eight Khamtrul Rinpoche Dongyu Nyima, a great Drukpa Kagyu lama. She was one of the first Westerners to be ordained as a Tibetan Buddhist nun.

After many years learning and practicing, she sought more seclusion to practice more intensely. She found a secluded cave near Lahaul where she spent 12 years, the last three years in strict retreat. Tenzin Palmo left India in 1988, travelling to Italy where she taught at various Dharma centres.

Before Khamtrul Rinpoche passed away in 1980, he had on several occasions asked Tenzin Palmo to start a nunnery. In 2000 she established Dongyu Gatsal Ling Nunnery in Himachal Pradesh, India, and the first nuns arrived. Dongyu Gatsal Ling is now a thriving Nunnery with 70 nuns studying and practicing the Dharma.

In 2008 Tenzin Palmo was given the title of Jetsunma, which means Venerable Master, by His Holiness the Twelfth Gyalwang Drukpa, Head of the Drukpa Kagyu lineage.
Posted by Scott Wilson at 10:40 PM